You are using an outdated browser. Please upgrade your browser to improve your experience.
by Christine Chan
November 7, 2016 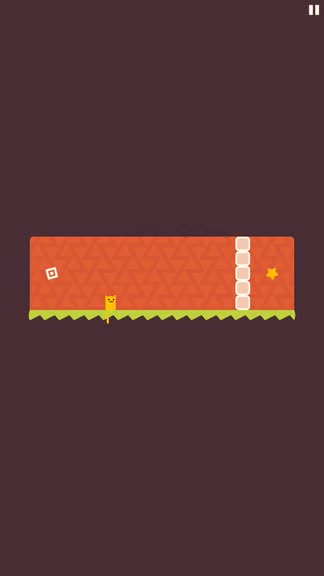 Nekosan (Free) by 1Button SARL is a twitchy reflex platformer that is both challenging and cute. If you enjoy a good ol’ game of cat and mouse, and like to test your reflexes, then Nekosan is a fun little time waster. It is from the same guys who brought you other great gems, such as Bicolor and Mr Jump, so expectations are a bit high, considering their previous work.

These days, I don’t have a lot of time for full console games in my downtime, but thankfully I still have my iPhone games to play and enjoy when I have a few spare moments. For these quick chunks of downtime, I like to have a game that I can pick-up-and-play in short bursts throughout the day, rather than having to invest hours into in order to feel like I’m making any progress. This is one of the biggest reasons why I like puzzles on my iPhone, and even some quick platformer games. So naturally, when I heard of Nekosan from 1Button, I had to check it out — plus, how can I resist a game with cute cats and mice? 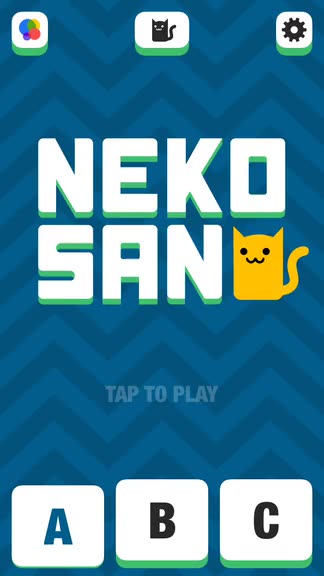 Visually speaking, Nekosan carries a minimalistic aesthetic that is delightful to the eyes. The game features solid background colors for each stage, but the layout of the level is essentially a cutout in the center of the background, with nice contrast due to the patterned backdrops in the cutouts. The cat and mice are fairly simple looking but still adorable, and there are nice, small details such as snow and grass that are layered on top of the platforms, floors, and spikes. The colors range from soft pastels to richer and bolder hues, but everything meshes together nicely. Animations in Nekosan are buttery smooth and fluid, so I had no issues with lag on my iPhone 7. The game soundtrack is rather upbeat and quirky, making it rather charming to listen to and fits the eccentric nature of the game well. To top things off, the sound effects are cute, and will bring a smile to your face, even if you’re failing at the levels.

Nekosan is a level-based platformer game, so players need to advance through it one stage at a time. At the moment, there are eight level packs to go through in Chapter A, and they consist of about 10 parts each. So while it may only seem like there are eight “levels,” you have to get through 10 challenging tests to complete it, so there is more than meets the eye here. You also only have a limited number of lives to start out with (nine lives to be exact), but you get refilled with some extra if you can get through all of the sections. The goal in each stage is to collect and recover all of the stars that the mice stole. Once all stars are in your possession, that means you can move on to the next stage. There are also secret fish that you can try to acquire as well, though it is not necessary in order to complete the stage. In fact, the fish are used to purchase other playable felines, but this is purely cosmetic. Your score on each level is determined by the amount of time that it took you to complete all of the stages in the level, so think of it like a speedrunner.

The controls are pretty simple and allow the game to be played with one hand, but it does take some time to get used to and master. With one tap, your cat will start moving forward in the direction it is facing. The cat stops once it hits a wall, and you can tap the screen again to have it go back the other way. If you tap on the screen while it is already in motion, you’ll have it jump. To reach high places, you will have to do continuous wall jumps, so once you’re on a wall, just tap again to jump in the opposite direction, and keep doing that until you get where you need to be. Eventually you will come across mice, and the trick to these critters are to avoid them, but if you need to, you can also jump on top of them and “squash” them for a few seconds, a la Mario-style. Again, the controls do take some time to get used to, and they are far from perfect, but I did find them to be rather responsive for the most part. It’s just the timing that has to be right on harder stages.

My only complaint about the controls is that the game does not include any guidance on how to play in the beginning, so players are left trying to figure things out on their own. I was confused at first, and only after tapping the screen did I manage to find out how to play. Usually I am not for handholding in video games and like to figure out stuff on my own, but this can’t be said for everyone. That’s why I think there should at least be some basic tutorial, even optional, that shows the ropes to all players, because otherwise, the controls are a bit confusing. 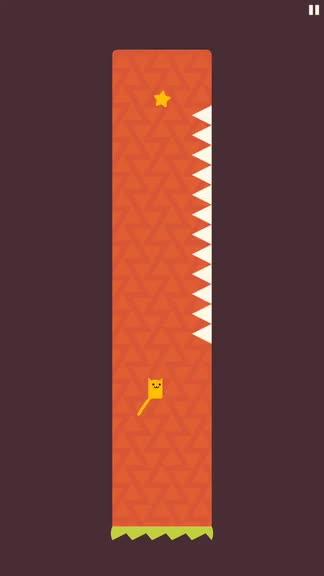 The game starts off pretty easy, but things get a bit more complicated as you get further along, since new obstacles and challenges are introduced at a gradual pace. For example, spikes are thrown at you early on, but like any good gamer knows, spikes are bad, so you have to avoid them or you will lose a life. Eventually, you’ll also stumble across floating switches to toggle walls, swarms of mice, moving platforms, crushing pillars, and much more. If you have had any experience with platformer games in general, then you know the drill. If not, well, it’s pretty straightforward.

One thing that bothered me about Nekosan is the abundance of ads. It seems like an ad pops up after every other stage you complete, and it interrupts your game flow, as they are rather abrupt. Fortunately, they aren’t video ads and you can dismiss them immediately, but they are still annoying. There is an in-app purchase to remove all ads for $2.99 though, so that is an option if you cannot stand them. Other in-app purchases include a pack of nine lives, keys to unlock levels you haven’t reached yet (if you’re stuck), and Maurice the pig, and these all cost you $0.99 a pop.

I’ve only had time to check out Nekosan this morning, but I’m enjoying it so far, aside from the overabundance of ads and unique control scheme. The minimalistic design is pleasing, the character are adorable, the music is fun to listen to, and the gameplay is rather challenging, as it combines reflexes, platformers, and a dash of puzzle (you still need to figure out how to clear a stage). I just hope to see ads to be less obnoxious in the future, and some kind of guide on the controls for new players. Otherwise, 1Button has done it again with a fun game to pass the time with.

I recommend giving Nekosan a try if you are into platformer puzzles with a dash of reflex testing. You can find Nekosan on the App Store as a universal download for the iPhone and iPad for free . There are in-app purchases, as well as an iMessage sticker pack included. 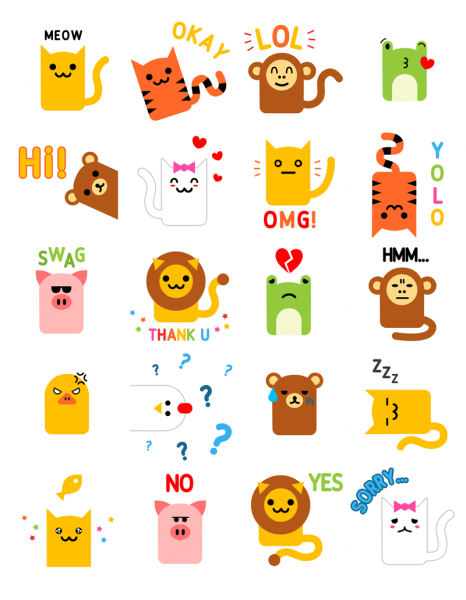 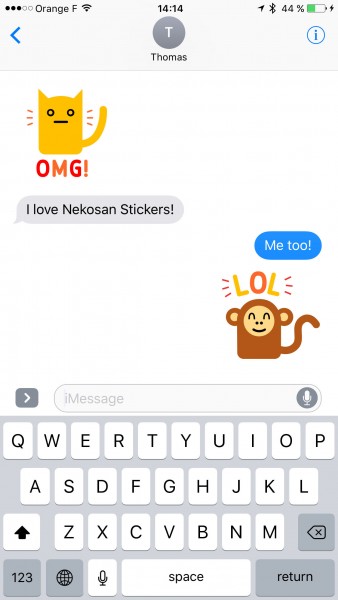 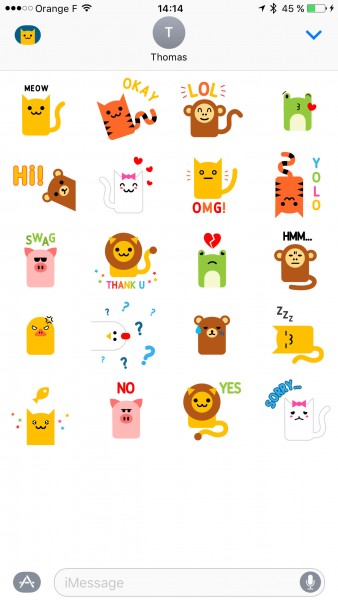 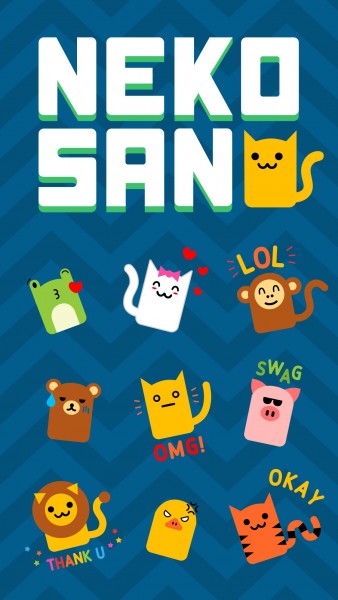 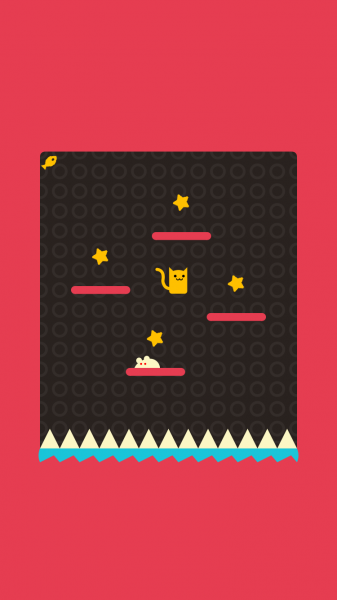 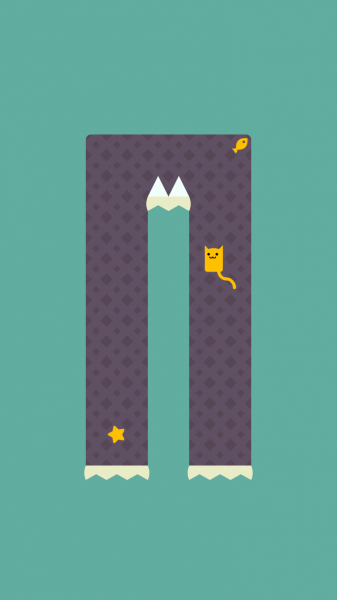 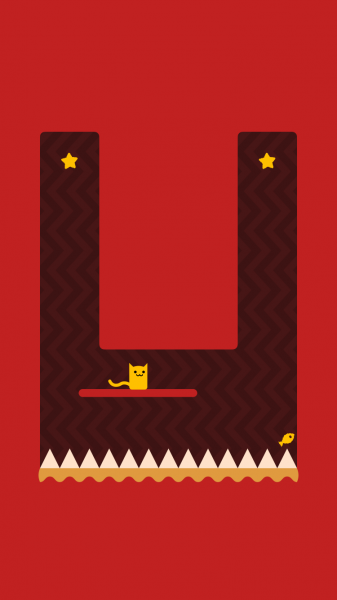 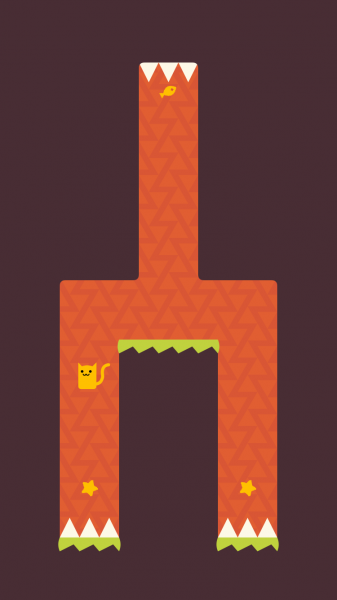 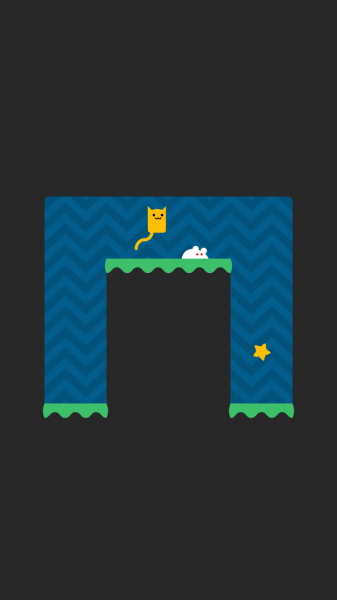