You are using an outdated browser. Please upgrade your browser to improve your experience.
by Christine Chan
March 10, 2016 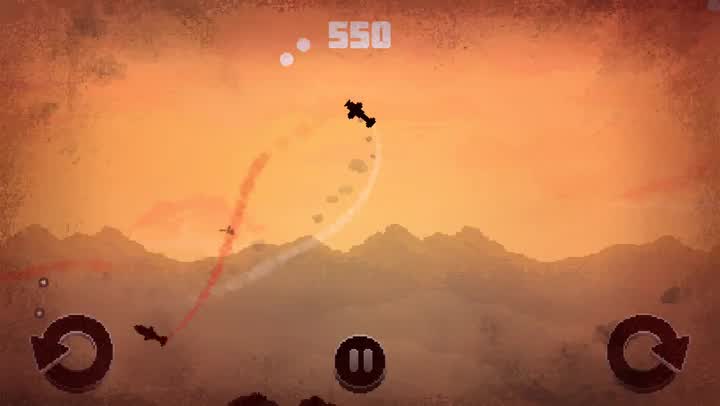 Pilots of the Dawn (Free) by Sapeli Studio Oy is an action-packed, retro dogfighting arcade shooter game. If you’re familiar with the highly-popular Vlambeer classic, Luftrausers, and have been clamoring for an iOS version, well, Pilots of the Dawn is the closest thing you’ll get … for now.

Ever since I heard of and bought Luftrausers on Steam back in 2014, it has earned a spot on my “favorite games of all time” list that I keep in my head. Luftrausers became one of my favorite games because it was from Vlambeer (they make awesome games like Ridiculous Fishing and Super Crate Box), had some awesome sepia-toned retro graphics, and the dogfighting action was downright amazing. Even though I loved playing the game on my laptop, I wished it was available on iOS, since I do most of my gaming that way these days (if not for my 3DS). But honestly, I’m not sure how the controls would translate to touch screen devices, so who knows if we will ever see Luftrausers on mobile. Fortunately, there is now Pilots of the Dawn (PotD) for your mobile dogfighting fix. 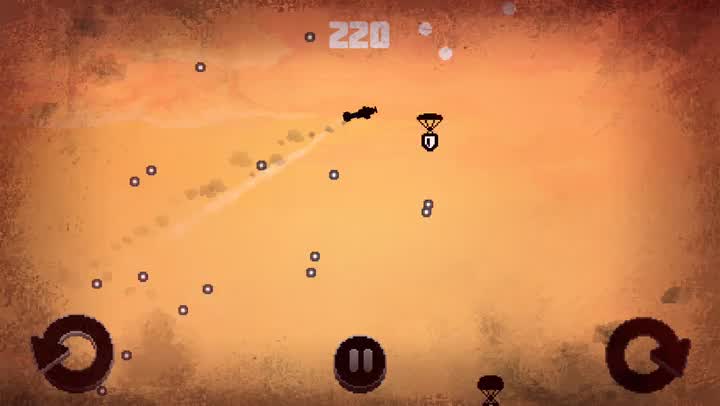 In terms of Visuals, PotD has a classic vintage aesthetic that closely resembles what you would find in Luftrausers. In fact, it’s pretty obvious that this entire game has been “inspired” by Vlambeer’s popular title, to the point where one could mistake it for the real thing if they weren’t careful. I do wish that the developers could have been a bit more original in how they chose to present the game, but since Luftrausers is not coming to iOS anytime soon, I guess it’s just something I’ll have to live with. A differentiating factor with PotD is the fact that the game does have different colors to represent day and night cycles, so everything is not just through sepia-colored glasses. The sprites used to represent aircraft and sea-ships are clearly visible against the colored backgrounds, and animations are smooth and fluid. The quirky chiptune soundtrack is fun to listen to, and the sound effects add a nice final touch to the overall package.

There are three game modes in PotD: Endless, Daily, and Campaign. Unfortunately, the Campaign has to be unlocked by scoring enough points in Endless. While it’s a fairly low threshold to cross to unlock, it does take a bit of practice (just like Luftrausers). In Endless, you will just participate in aerial and sea combat with enemy ships until you take enough damage or crash into the terrain, hoping to rack up some points before dying. Daily features a new challenge every day, which are randomly generated, so it’ll always be something different. Unfortunately, the Daily mission will become unplayable until the next day if you choose to go back to the main menu, which I found a bit annoying. Campaign features 30 different missions that players must go through in a test of skill and aerial combat prowess. These missions include objectives like “kill two enemies,” “defeat the boss,” or “survive for 15 seconds.” They are all different and will truly put your skills to the test, so be warned — this game is not for the faint of heart.

The controls in the game are a bit more straightforward than what you had in Luftrausers, but again, it takes a lot of time and practice to master. In PotD, your airship will fire its weapon automatically, so you don’t have to worry about having to manually attack. Instead, there are two buttons in PotD, which are both located in the bottom corners of the screen. The one in the right lets you steer your ship clockwise, and the other goes counter-clockwise. In order to do well in the game, you’ll need to time your turns so that your bullets actually hit the enemies. It can be a bit frustrating at first, but once you get the hang of things, and get a better ship, then it gets better. 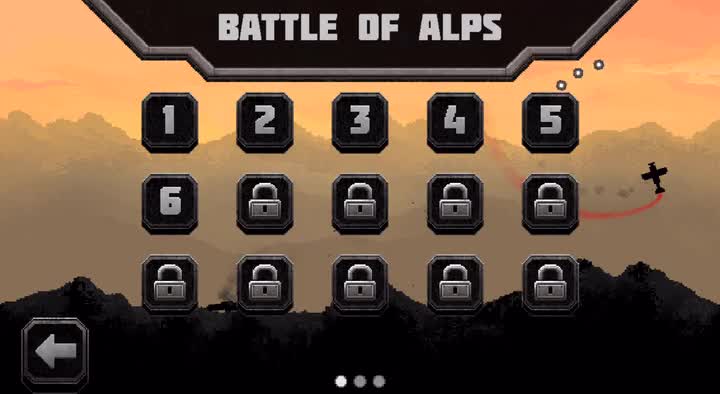 Just like with Luftrausers, there are different ships that you can play as. Of course, PotD lacks the customization of different bodies, engines, and weapons, since there are only five pre-built ships for you to choose from. However, each one has its own set of attributes for handling, speed, and hitpoints, which you need to take into consideration before going into combat. These characteristics affect the durability of your plane as well as the controls, so practice is also needed for each one. To unlock the rest, you have to spend your hard-earned coins on them, and they must be unlocked in chronological order, so you can’t just save up 500 coins and go for the last (and probably best) ship without using the other ones first. But since PotD is a free game, you can get them early with in-app purchases.

In addition to just unlocking new and stronger planes, old one scan be improved through upgrades as well. While you’re in the Hangar, just scroll to the ship you want to use, and then select the attribute you want to upgrade. The higher the level, the more it will cost. During fights, you can also fly your ship up higher for the chance of finding power-up items, such as rapid-fire, repair kits, and shields. In similar fashion to Luftrausers, you don’t see how much health your ship has, but the more damage you sustain, the more red the screen becomes. Unfortunately, you don’t regenerate hitpoints if you don’t touch the screen, which is what Luftrausers does (repair your ship slowly by not firing your weapon).

Since I’m a big fan of Luftrausers, I was excited to see this on the App Store, as it’s pretty much the closest thing to Luftrausers on iOS for now. However, most of the time I feel that the game is pretty dependent on luck, as enemies are already shooting at me as I spawn on the map, so I’m already taking a lot of damage as I try and position myself to take them out. I also don’t like that you can’t regenerate your ship if you just don’t touch the screen, as finding power-ups while trying to avoid enemy bullets is a frustrating and difficult. Despite these little annoyances, I am still enjoying the game, since it can differentiate itself a bit from the classic Luftrausers while also retaining a familiar aesthetic. At the end of the day, Pilots of the Dawn is a fun, time-wasting arcade shooter that tests your skills as a dogfighter. Like Luftrausers, the weak need not apply.

I recommend checking out Pilots of the Dawn if you like Luftrausers and have been wanting a similar game for iOS, or just enjoy intense, arcade shooters. Pilots of the Dawn is available as a universal download on the App Store for free with in-app purchases. 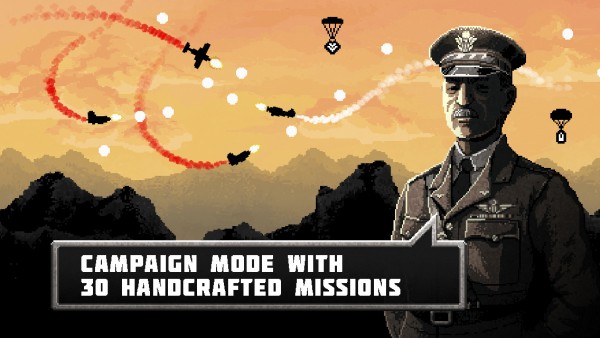 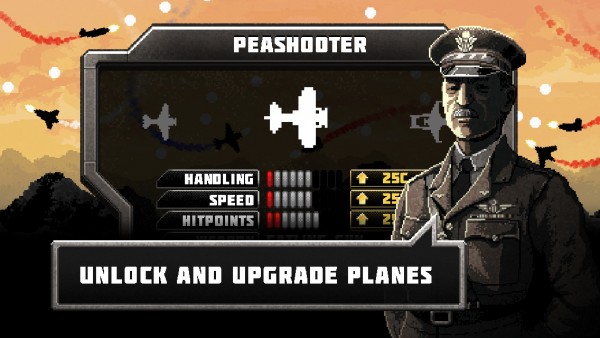 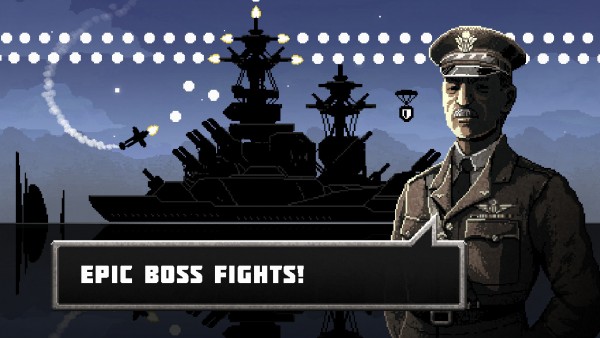 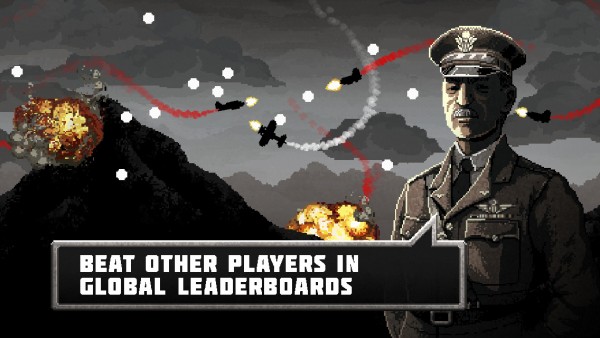 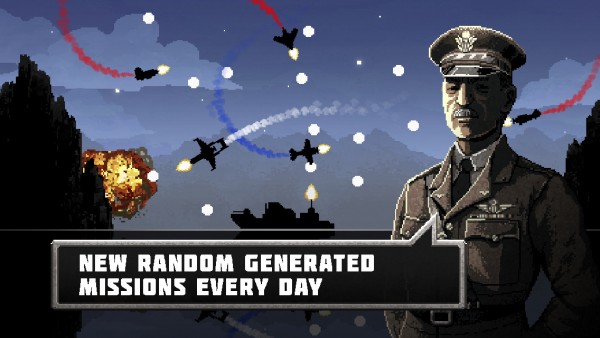