You are using an outdated browser. Please upgrade your browser to improve your experience.
by Christine Chan
August 27, 2013 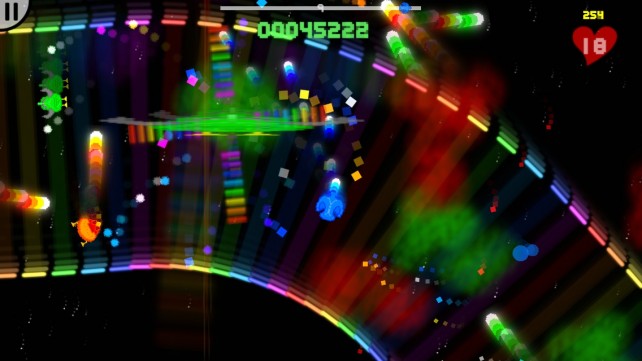 BlastTrax ($0.99) by James Gamble is a retro-inspired shooter that will take you back to the days you spent blasting aliens at the arcade.

Arcade games are definitely something I can’t get enough of, as I grew up on these. Seeing pixelated graphics, chiptunes, colorful explosions — well, these are just plain fun. I love the vintage feeling and sense of nostalgia that these games bring back, and it just shows that these types of games have stood the test of time even now. BlastTrax combines a bit of racer with fantastic shooting action, and it’s definitely a gem in the App Store. 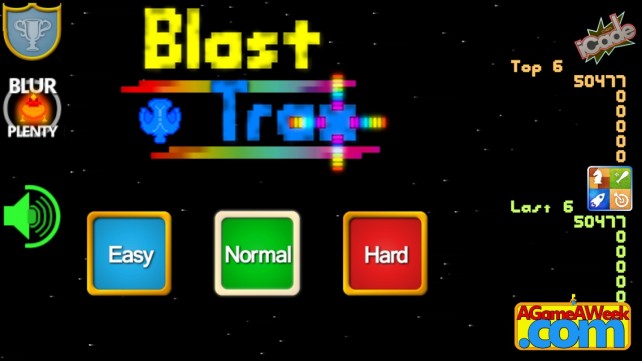 You play as an unnamed hero who is in his spaceship after battling aliens, and must get to his next destination through the use of “space lanes,” which are essentially like race tracks. Unfortunately, the aliens are swarming all over the lanes as well, making your job difficult. You’ll have to help the hero navigate to the goal at the end of each track, while avoiding hostile forces and staying in one piece.

BlastTrax features plenty of levels, with each one getting progressively harder to reach the finish. You start out with 25 health, as indicated in the top right corner. Taking any hit will deplete this by one, and if you lose all of your health, it’s game over. You can refill your hearts by collecting the pixels that defeated enemies leave behind.

To control your ship, just drag your finger around on the screen — this will steer as well as fire your weapon. While this works, and makes it easy to play with one hand, I wish that the game went with a more traditional dual-stick shooter route, having separate controls for movement and attacking. Personally, it took me a bit of getting used to, as I was expecting to have separate movement and shooting joysticks.

While the game only features one game mode, there are three difficulties you can choose from. I recommend the Hard mode, because I felt that even Normal was a bit too easy (there’s also Easy for casuals). On Hard, I felt that the game starts out a lot faster, as there are more enemies starting out with you and way more stuff to dodge and blast your way through. 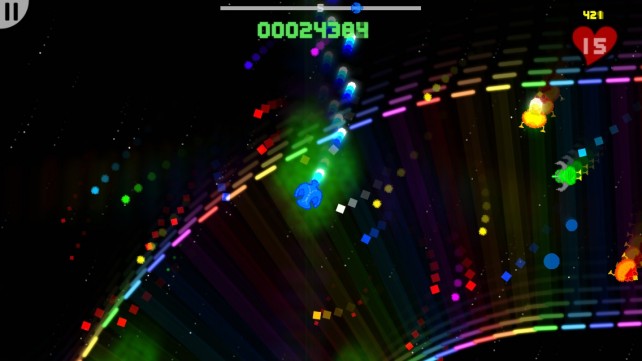 For competitive players, there is full Game Center support for three leaderboards and 32 achievements to obtain, keeping replay value high.

Even though this is a pretty simple game, I’m loving it so far. The chunky, pixelated graphics that represent your ship and the enemies take me back, and I love the chiptune soundtrack that accompanies it. Plus, it’s incredibly fast-paced, and there are plenty of levels to go through, with various forks in the path that make things easier or more difficult, depending on which way you go. This is the type of game that will keep you entertained for a while, as you will want to try and beat your previous score.

I recommend this game to anyone who enjoys retro arcade shooters and are looking to kill some time. You can grab BlastTrax in the App Store as a universal app for $0.99. 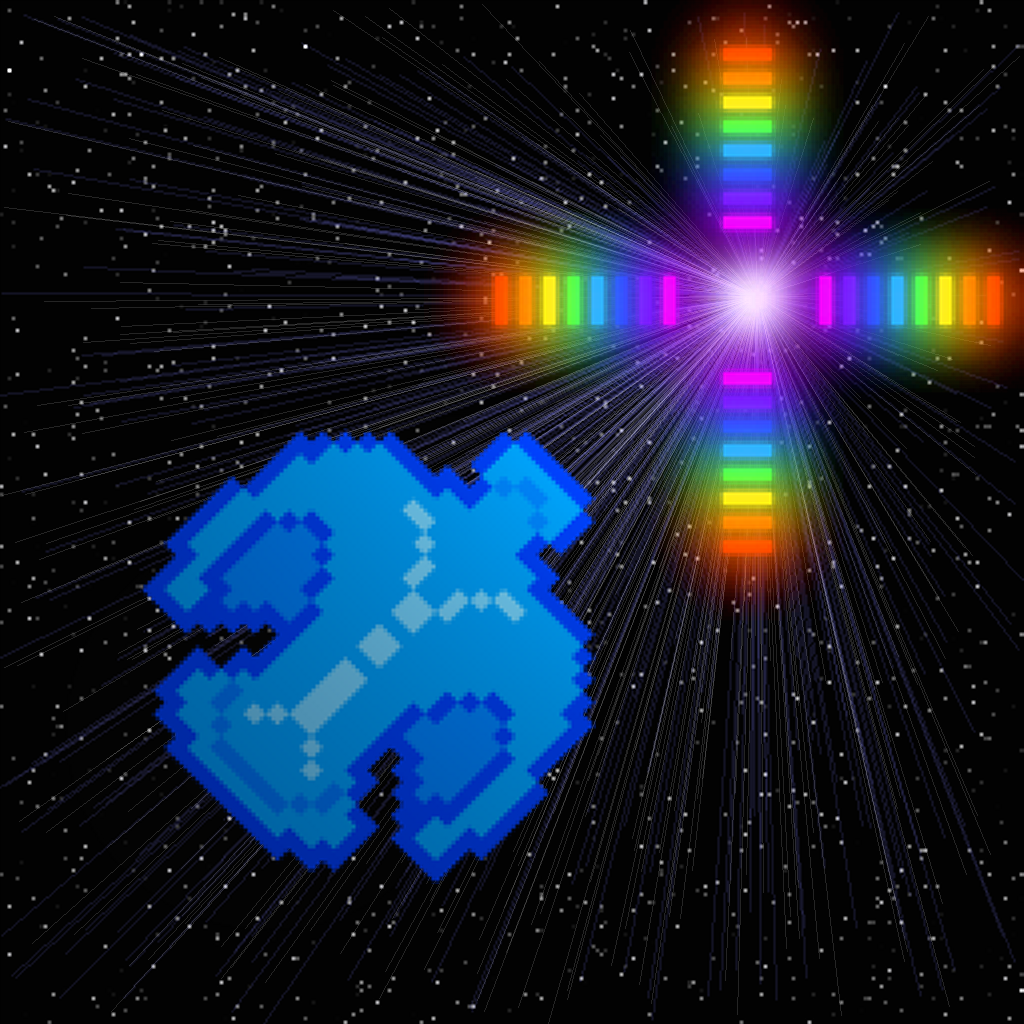 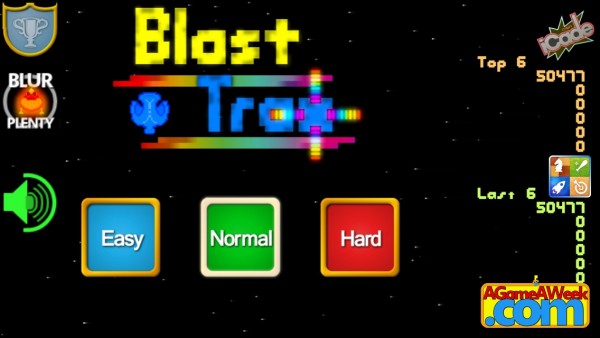 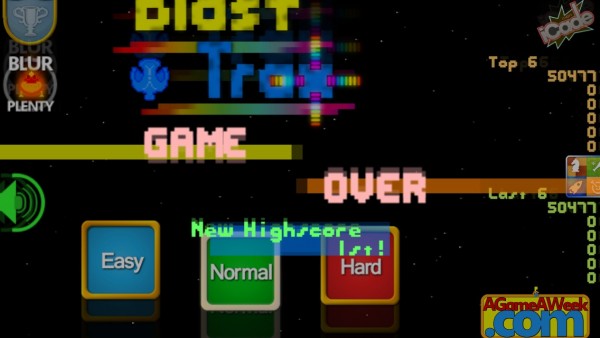 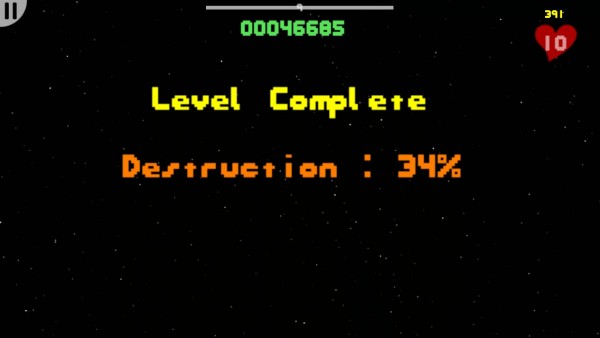 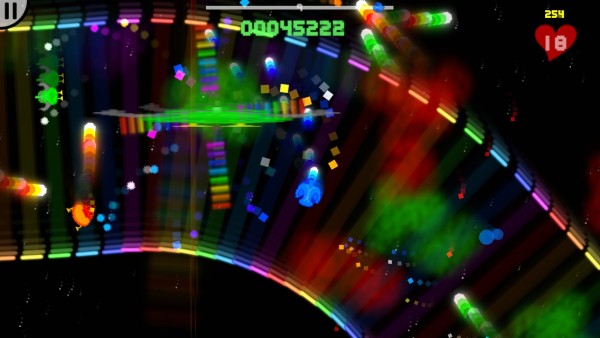 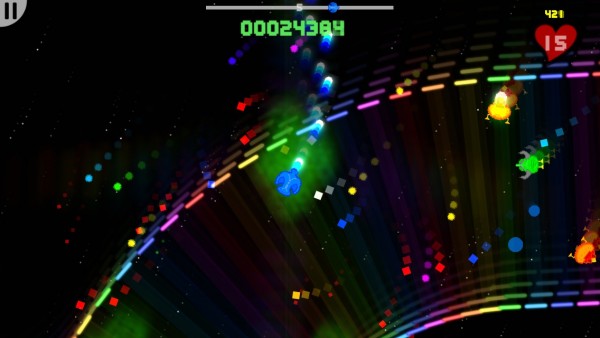 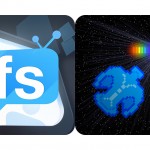