You are using an outdated browser. Please upgrade your browser to improve your experience.
by Christine Chan
August 25, 2016 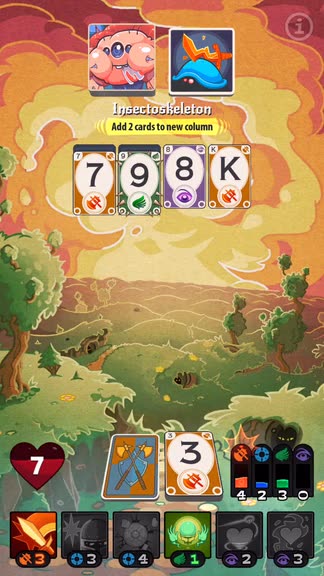 Solitairica ($3.99) by Righteous Hammer Games Inc. is an insanely fun mashup of roguelike RPG and solitaire. If you are a big fan of RPG combat, roguelike progression, and traditional card games, then you are truly in for a treat with Solitairica.

Solitaire is a game that everyone has played numerous times at some point in their life, whether you were just killing time before leaving work or school, or just to give your brain a bit of stimulation. I’ve played solitaire on old PCs whenever I had a chance as a kid, and I just found it satisfying. In recent years, I’ve also developed a fond appreciation of roguelike games because they’re mostly RPGs, which I spent most of my high school years on. So when I first heard of Solitairica about a year ago, I was excited and eager to play it. The game launched on Steam earlier this year, and now it has arrived on iOS. I’ve spent time with the Steam version, as well as an iOS beta for a few weeks, and let me tell you — this is one of my favorite games so far this year, and one you should not miss. 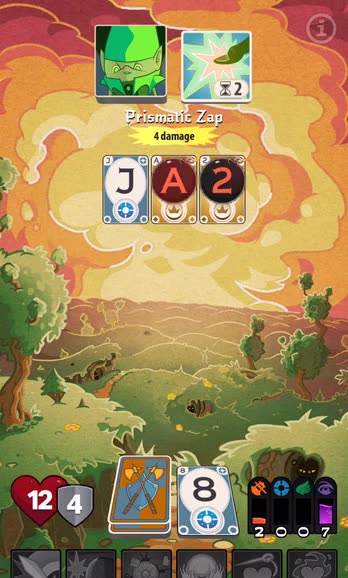 The graphics in Solitairica are beautiful and unique, as everything is done in a rather humorous and cartoonish style. The backgrounds for each environment appear hand drawn and have a nice canvas-like texture, which make the enemy monster avatars and cards look crisper on your Retina screen. All of the enemies have their own distinctive appearance and little details that make them stand out. The colors in the game are bright and vivid, and the dark, gloomy hues on the main map give nice contrast with the card backs and upcoming monsters. The animations are smooth and fluid with no lag on my iPhone 6s Plus. The soundtrack has a rather eerie tone to it, and the sound effects of the cards and monsters are comedic and fun.

In Solitairica, you take on the role of a warrior who is the last chance that the land of Myrroid has to defeat the evil Emperor Stuck and his dark forces and recover all of the stolen hearts. To do this, you’ll have to reach the castle, but there will be a lot of enemies who will make sure that doesn’t happen. You’ll have to engage in turn-based battles through solitaire and collect the four energies (attack, defense, agility, and willpower) to overcome your foes and continue forth to the Castle of Stuck. There are different areas that are represented by the color on the back of the face-down card on the map screen, and you’ll encounter many different types of foes. Each one has their own speciality that you’ll have to strategize and plan ahead for. Each run you go on in Solitairica will be different, and when you die, you’ll have to start over on your journey. But the real fun with roguelikes is watching your progression get better over time and with practice.

So how exactly do you battle in Solitairica? As I mentioned, you and the enemy take turns. On your turns, you will check the current card drawn and then tap on the card stacks that show cards that are one higher or one lower than the drawn card, just as you would in solitaire. Once all cards are eliminated from the board, then you win. If you can no longer make any matches for the card sequence, then you’ll have to draw another one, and then the enemy draws a card from their own stack. But if you look closely at each card, they are each colored differently: orange for attack, blue for defense, green for agility, and purple for willpower. As you successfully stack cards, you’ll collect energy for that attribute, which is shown in the bottom right. When you have enough energy of a certain kind, your equipped spells along the bottom will be available for use, and a tap activates it. 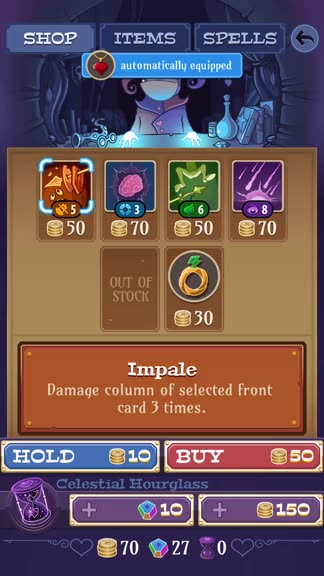 These spells help you get rid of unwanted cards, set up shields to prevent taking damage to your health (once it reaches zero you lose), check the next card, and even heal yourself. After you clear a stage, you’ll earn coins depending on how you did. The coins can be spent in the shop between battles to buy new spells and equippable items (increase energy gained or maximize your health points, for example) that help you in fights. It’s important to read what each spell or item does as well, so you can use it to your full advantage. If you can’t afford a spell or item in the shop, you can also spend 10 coins to hold it for the next visit, since the shop will rotate spells and items after each round. Your character can have up to four items equipped, and have a maximum of six spells in battle. If you have bought more than the allotted amount, you’ll have to pick-and-choose what to take with you before each level.

As you get further in the game and closer to Castle Stuck, you will find tougher enemies, more cards in battle, and much better loot in the shop, though it ends up being more expensive too. You also earn Wildstone after each journey that can be spent to upgrade cards (Ace, King, and Queen boosts) and even purchase new decks that change your play style. Along with the procedurally generated run each time you play and achievements to earn, Solitairica has high replay value.

I’ve been playing Solitairica for a while on Steam, but I’m super happy to see that it’s finally on iOS. The graphics are stunning, sounds and music are delightful, the humor is spot-on, and the mashup gameplay works incredibly well. There is high replay value due to the different decks, card upgrades, spells, items, and randomly generated levels, so it’s a game that one should be spending a long time with. In fact, you will have a very hard time putting this one down. I just wish that it weren’t so expensive to upgrade cards and get new decks, but that adds to the longevity of the game overall.

I highly recommend Solitairica for anyone who enjoys solitaire, roguelikes, and RPGs. Or if you just want an interesting new game that’s unlike anything you’ve tried before, this is it. Solitairica can be found on the App Store as a universal app for your iPhone and iPad for $3.99. There are no in-app purchases. The Steam version is available for Windows, Mac OS X, and SteamPlay for $11.99. 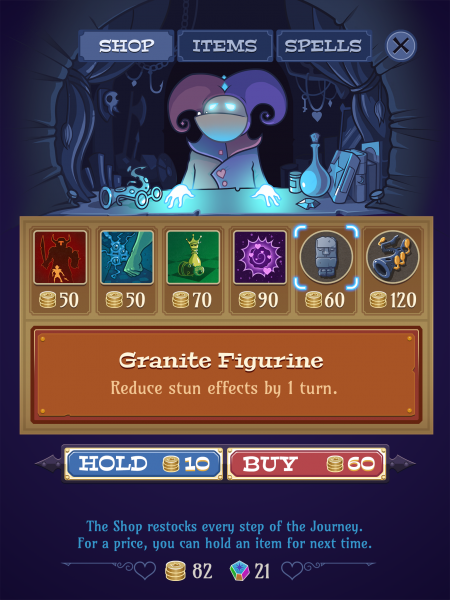 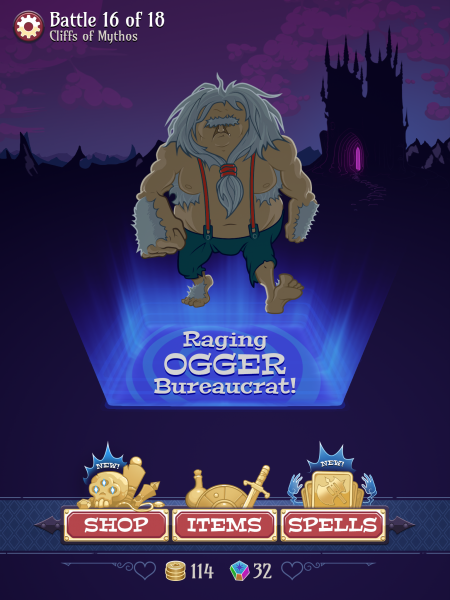 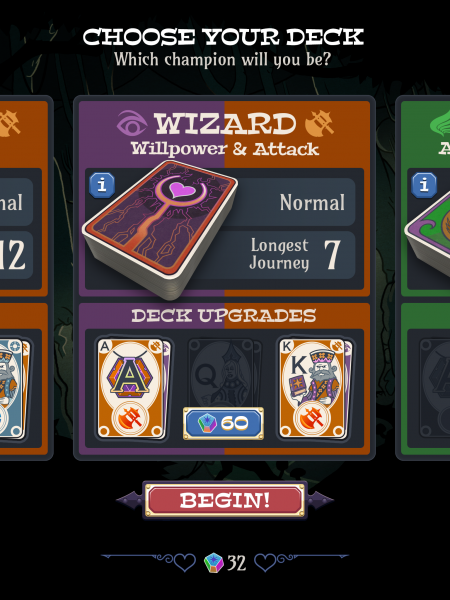 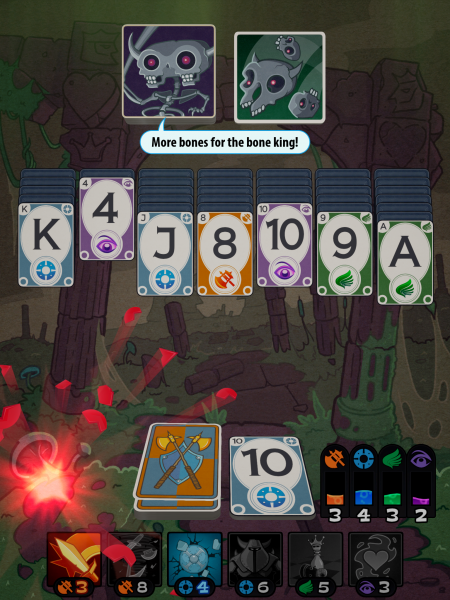 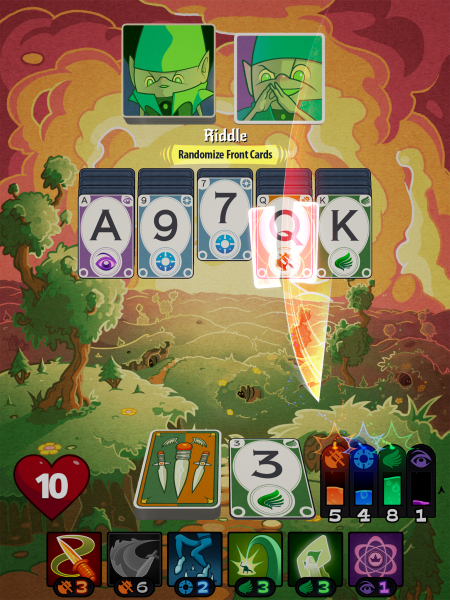 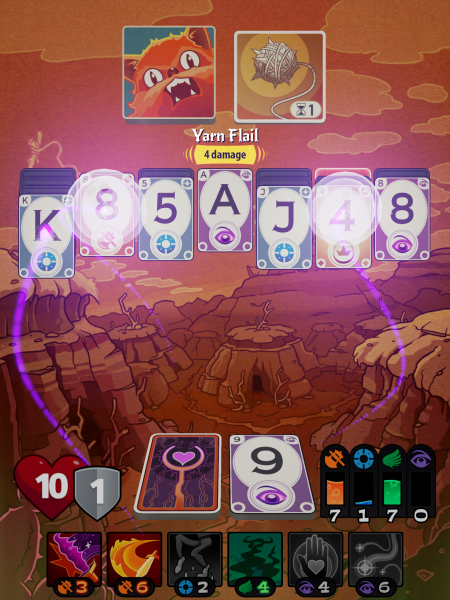