You are using an outdated browser. Please upgrade your browser to improve your experience.
by Christine Chan
March 1, 2016 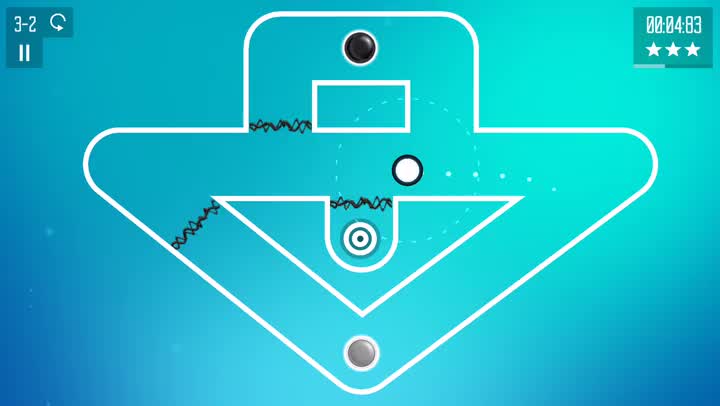 Spiral Splatter (Free) by Thumbspire Inc. is a deceptively simple arcade puzzle game that will keep you occupied for hours on end. If you enjoyed games like Primitives, then you will like what Spiral Splatter brings to the table.

In my spare time, I like to play video games. I have several different consoles at home, as well as handheld units, where I like to play my lengthy games. However, when it comes to iOS games, I could always go for either an arcade or puzzle game where I can just spend a few minutes playing it throughout the day. It’s the arcade games that keep my reflexes sharp and on point, while the puzzles stimulate my brain so it doesn’t completely turn to mush by the end of the day. Naturally, when you combine the two genres, you end up with a challenging, fast-paced puzzle that will keep you on your toes throughout the entire time. That’s why when I heard of Spiral Splatter, I was intrigued and had to check it out for myself. 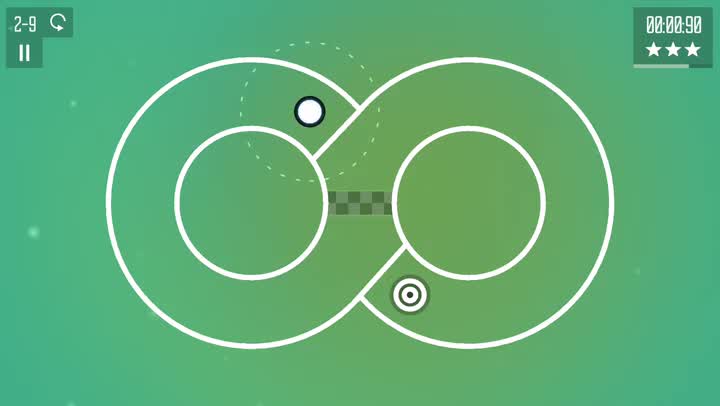 Visually, Spiral Splatter is pretty simple and clean, which will definitely appeal to the minimalists out there. The game features brightly colored backgrounds with subtle color gradients, and contrasting white and black lines and objects in the foreground. The background colors represent the chapter that you’re in, so you can see your progression as you play. As you make mistakes, the screen will flicker red, and when you crash into a wall or obstacle and die, the entire screen shakes a bit and you leave a splatter behind. So as you die continuously by making the same mistake, the level becomes covered in paint splatters, almost like it’s a tribute to your failure (but it’s okay, really. Animations are smooth and fluid in the game, and there is a soothing, atmospheric soundtrack that is best experienced with a good pair of earbuds. The sound effects can be rather abrupt and sudden as you make mistakes, which serves as a nice disparity when compared to the tranquil music.

Right now, there are 11 different “stages” in Spiral Splatter, which are actually chapters. Each of these stages is broken up into about 10 levels each (the first only contains six), and like many games, it goes with a star system, so players can earn up to three stars on each level, depending on performance. The objective is simple: get the white ball to the target by guiding it through a maze. However, don’t be fooled — the game gets trickier and harder as you progress. Stars are earned by how fast you complete the stage, so the faster you are, without making mistakes, the better. Some levels are also longer than others, and there are checkpoints that let you start from that point, instead of the beginning, if you die. However, when you crash and die, you don’t necessarily have to restart the level, since you just re-spawn, but the timer keeps going. If you prefer to try again without making an error, then you can just restart.

The controls in Spiral Splatter are simple and intuitive. To move the ball through the labyrinths, just drag it through with your finger. While that sounds easy enough, be warned — your finger will partially block your view, which can cause you to get too close to the walls — this is when the screen will flicker red. But if you go too fast into a wall, then your ball shatters and you’ll have to try again from the last re-spawn point, or start over if you want to restart for a perfect attempt. As you get through the stages, new elements get introduced, such as lasers that need deactivating before you can pass, warping portals, moving walls, and much more. When you throw in the timer part, the game is incredibly challenging, since your finger naturally blocks part of the screen, and being rushed certainly leads to some unwanted crashes and splatters all over the maze. To add to the hectic action of the game, you don’t want to be too slow either — the ghost will catch up to you this way. 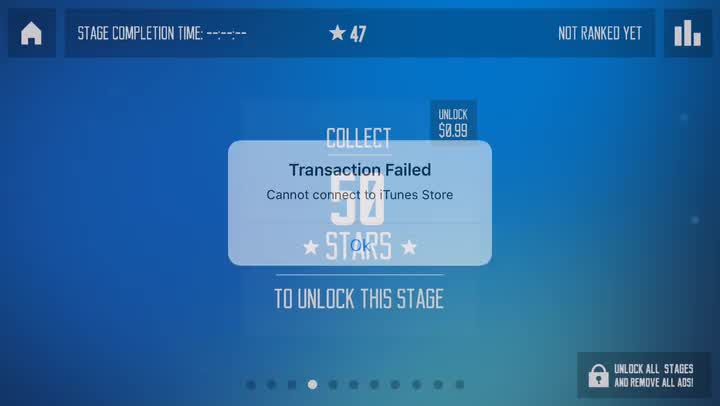 The only downside to Spiral Splatter is the fact that it is a free game, so there will be ads. These video ads will be shown after every few stages, and sometimes even when you just want to restart. It is a bit jarring to the whole experience, to say the least. To unlock and gain access to the other stages in the game, you need to have a certain amount of stars from previous levels. But if you are impatient, you can get unlock stages through in-app purchases of $0.99 a pop, and even get rid of ads with a separate IAP of $1.99. Another option is the $4.99 IAP that unlocks all stages and removes ads.

So far I’m enjoying Spiral Splatter. The visuals are simplistic but beautiful, the music is rather calming, though the sound effects add a bit of stress to the air, and the controls are simple but tricky. You have to be precise with your finger tracing in order to not mess up on the path, and the timers give a sense of urgency to it all, making it tricky to get the coveted three stars on every level. Still, the game holds rather high replay value, since you’ll want to come back and get all of those precious stars, and you can see how fast you are compared to your Game Center friends when it comes to completing a full stage. I just wish the ads weren’t so obnoxious at times, because it detracts from the overall experience. But I suppose that’s the reason why there are in-app purchases.

I recommend checking out Spiral Splatter if you’re in the mood for a challenging arcade puzzle game that tests your skills and makes you think at the same time. You can get Spiral Splatter on the App Store as a universal download for the iPhone and iPad for free with in-app purchases. 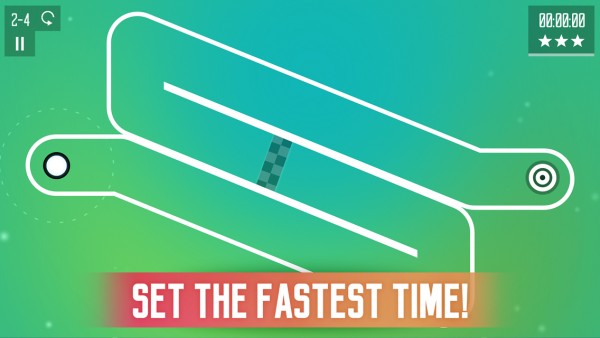 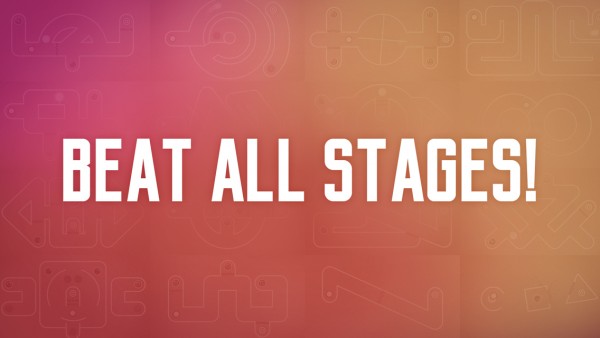 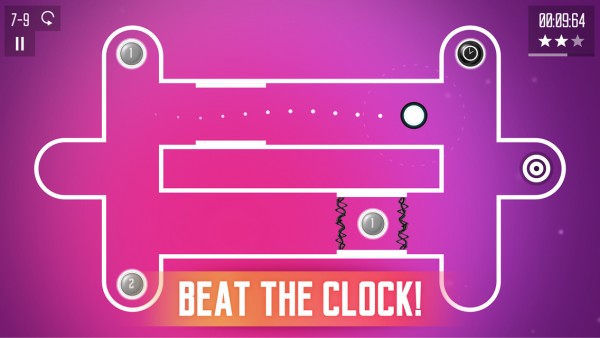 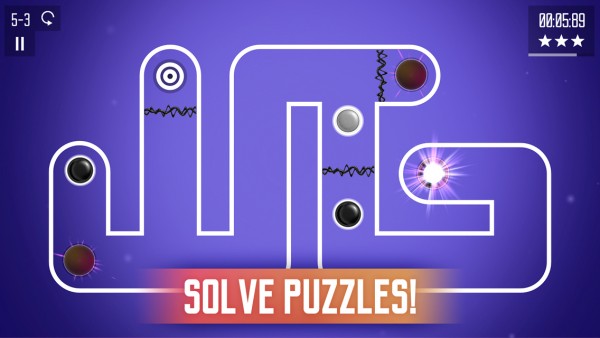 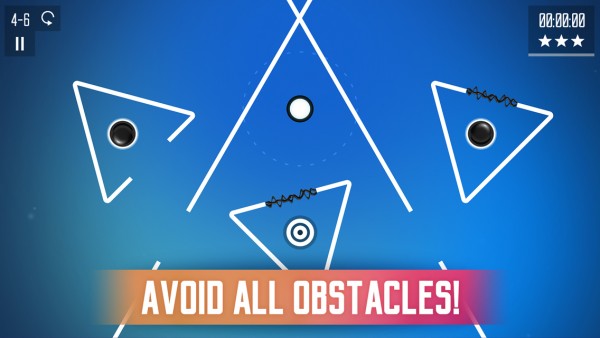