You get to fire orbs into the field above, and the orbs expand until the touch something else. The game challenges you to clear the orbs in a certain number of shots as you constantly added varied sized orbs to the mix. 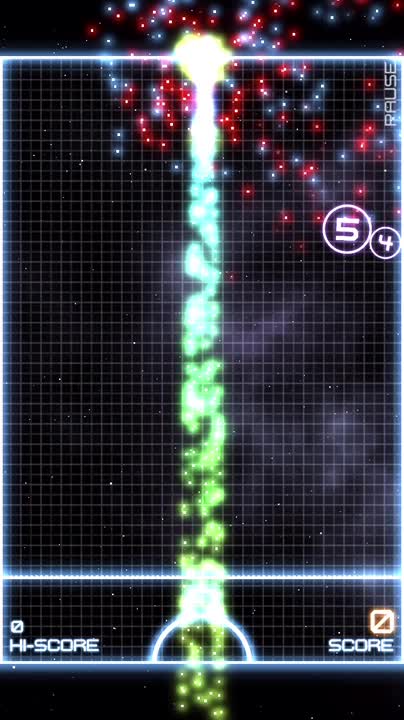 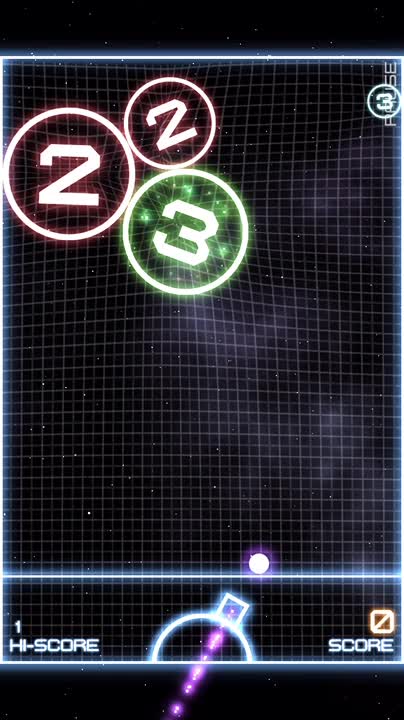 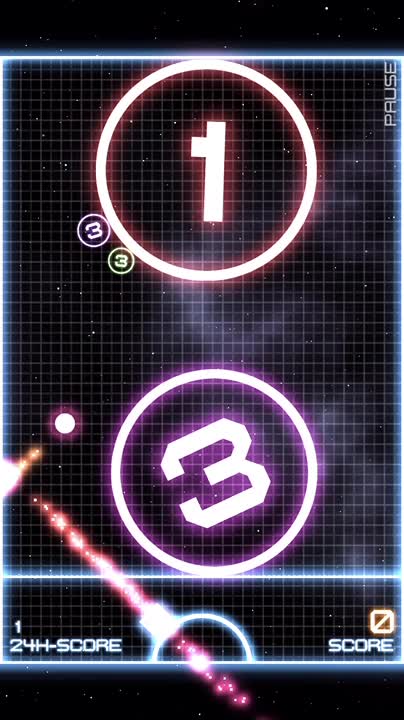 Get the Game of the Year** now! ORBITAL is a 1-thumb experience with a simple goal: score points by destroying orbs. A simple puzzle game for all with beautiful visual effects, it can be played in short sessions and is highly addictive. 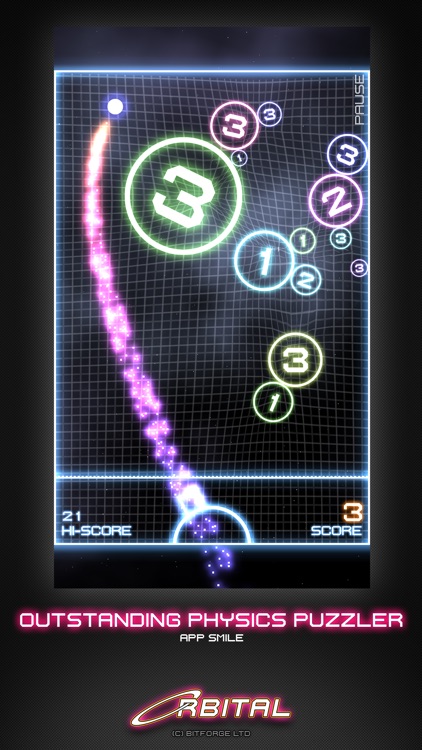 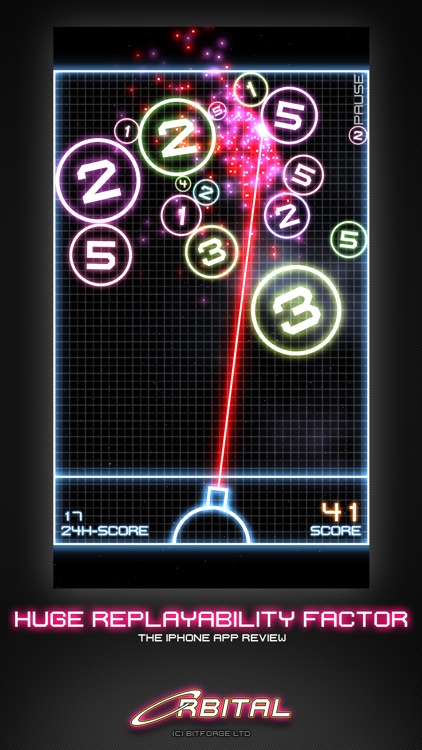 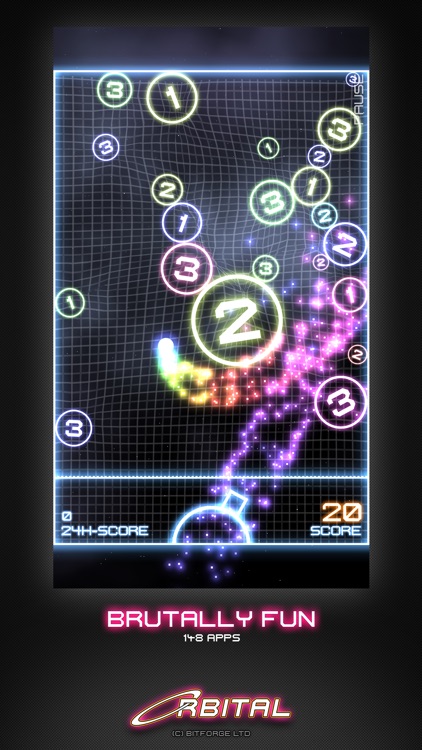 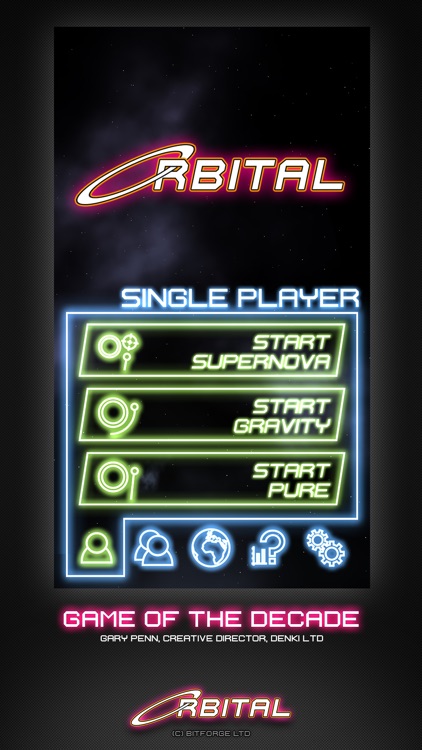 Get the Game of the Year** now! ORBITAL is a 1-thumb experience with a simple goal: score points by destroying orbs. A simple puzzle game for all with beautiful visual effects, it can be played in short sessions and is highly addictive.

WHAT THE CRITICS SAY

«A picnic to understand, but a marathon to get beyond the first few minutes, Orbital's simple style is perfect for those looking for fill the odd spare moment.» 8/10
- Keith Andrew (pocketgamer.co.uk)

«Orbital is the most visually appealing brick breaker type game that I have ever laid eyes on and had the chance to play.» 5/5
- Mike (iphoneincanada.ca)

«While there are already a few iPhone games that share the same gameplay mechanics as Orbital, none of them look anywhere near as cool.»
- Eli Hodapp (toucharcade.com)

«BitForge has managed to combine the addictive gameplay of Peggle and the beauty of Geometry Wars, two digital forms of crack, into one easy to use package.»
- Chad George (thatvideogameblog.com)

«Orbital takes simple gameplay and dresses it up with a unique “gravity” feature and enhanced graphics. The game can be very frustrating at times, but that won’t keep you from coming back for another try.» 4/5
- Will Raskin (148apps.com)

«Orbital has got fantastic graphics and unfussy features. Come to think of it, there are really no negative points about the game. Good going, Bitforge!» 5/5
- Yoyo (iphonefootprint.com)

You must shoot orbs into a grid with your cannon. The orb you fired will expand until it touches a wall or another orb. Each orb contains the number ‘3’, which decreases by one every time it is hit. After 3 hits they explode and you earn a point. The game could be endless… There is just one condition: a shot orb must not touch the death line above the cannon! If it does, the game is over.

A simple concept to rack your brains and nerves.

ORBITAL is based on Gimme Friction Baby by Wouter Visser. 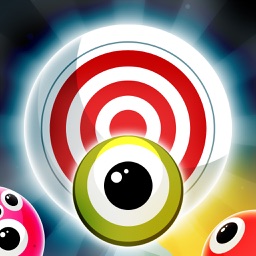 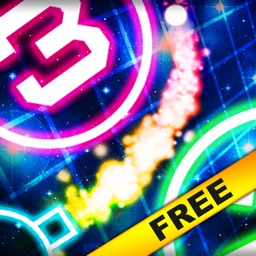 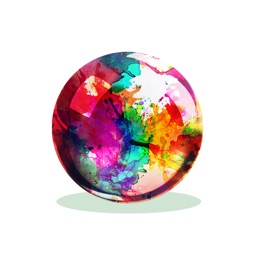 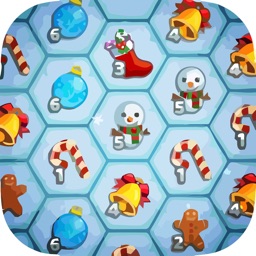 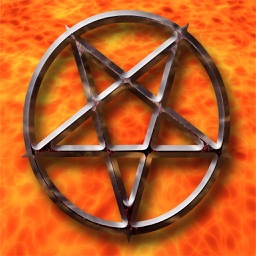 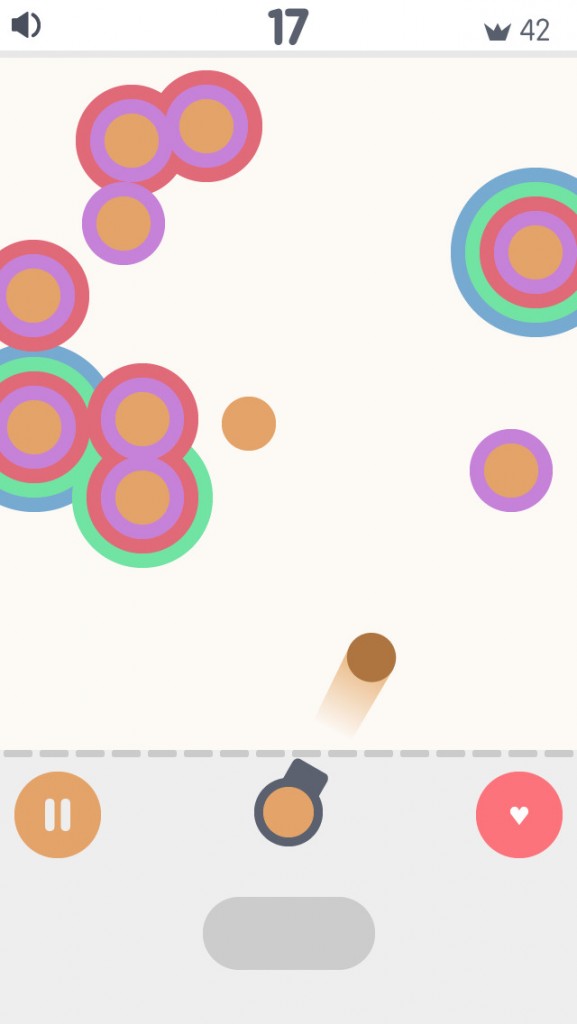 Shoot colored balls and rack up the points in Hue Ball

Kick back and relax with some soothing rounds of Hue Ball, an Orbital-like arcade game.

June 29 Christine Chan
Nothing found :(
Try something else