You are using an outdated browser. Please upgrade your browser to improve your experience.
by Joe White
June 22, 2010

Semi Secret Software's super-addictive, super-fun survival game, Canabalt, has now gone universal. And, even though the app looked pretty good upscaled on the iPad (as most pixel-art games do), the game looks even better when running at the iPad's full 1024x768 resolution. If you've never heard of Canabalt, then check out this app description, or play it free online and experience the game for yourself. The iDevice version is pretty much the same - except that instead of clicking your mouse to make the running guy jump, you simply touch the screen. If you haven't already bought Canabalt, then the app is currently priced at $2.99. If you have, then simply updating to version 1.4 will allow the app to run natively on your iPad. But first, a word of warning: updating Canabalt will erase your local scores. And as Canabalt is a score-based, beat-your-best type game, this might upset you - greatly. In which case be sure take a screenshot before updating if you do want to immortalize any high scores. 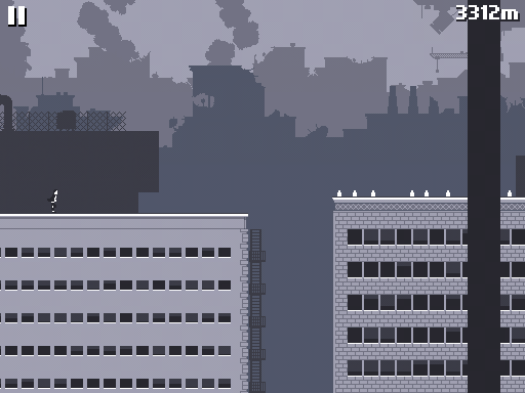 So if you've got an iPad and want to run Canabalt at full resolution, head over to the App Store and check for updates now. I downloaded it today over 3G, and I have to say: playing Canabalt on the iPad at full resolution is awesome.

Canabalt: Now A Universal App
Nothing found :(
Try something else