You are using an outdated browser. Please upgrade your browser to improve your experience.
by Scott Grizzle
June 9, 2010 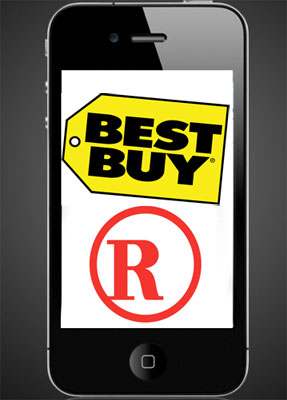 Want to get an iPhone 4 but don't have an Apple store nearby and don't want to wait in line at AT&T? News is now coming out that you will have at least two alternate places to buy an iPhone 4, starting on June 24th.

It was previously announced that you could get the iPhone at Apple store and AT&T locations on launch day or by mail. We also found out you could do pre-orders and reservations starting June 15th. However, the news of other locations is just now coming out as we have found that Best Buy and Radio Shack will both be carrying the iPhone 4 on launch day. Best Buy was expected to participate like they had for the iPad and iPhone 3gs launches, but Radio Shack had not had an Apple product on launch day before. Radio Shack has not issued an official press statement about the launch yet, but only made mention of it via their company twitter feed.

With online sales and at least four retail chains all selling the phones on June 24th, it will be interesting to see how many they sell and who sells out.