You are using an outdated browser. Please upgrade your browser to improve your experience.
by Joe White
July 24, 2010

By now, most of you already know that Apple launched its iPhone 4 Case Program yesterday; a service through which owners of antenna-issue-afflicted iPhone 4 handsets may seek a free case. That was great news, right? Well, the bad news hit home today as many users of Apple's Case Program app received emails stating that their free treat wouldn't reach them until September. That's right, I said September. As 9to5Mac reports, some cases aren't scheduled to be delivered until September 23, just a week before Apple ends its free bumper promotion. 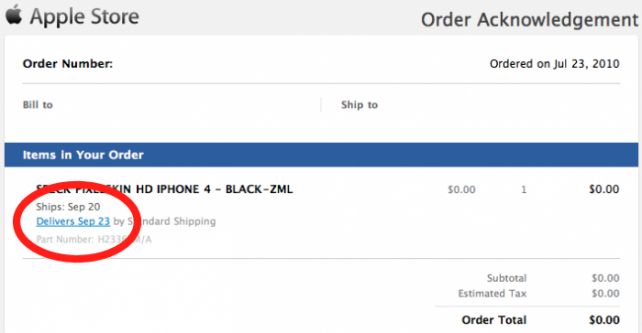 I already own a non-refundable third party case that covers my iPhone, and so I decided to go for an Apple iPhone Bumper when selecting my free case yesterday. In an email received shortly after I placed the order, Apple told me not to expect my antenna issue-banishing gift until August 31. It's not as bad as September 23, but really, it's not great, either. Is it selfish to resent the late delivery of something we're getting for free? I guess we deserve the cases, as we're all "death gripping" our iPhones into oblivion at the moment. Really we need them, rather than want them. But, the demand Apple and its third part manufacturers are receiving at the moment must be insane. I guess we should cut them some slack. If you've got a while to wait until your free case arrives, be sure to let us know your wacky estimated delivery dates in the comments box below! 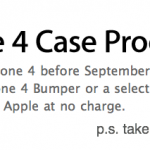 Apple's Third Party iPhone 4 Cases Take An Age To Arrive?
Nothing found :(
Try something else