You are using an outdated browser. Please upgrade your browser to improve your experience.
by Alexander Vaughn
August 24, 2010
I wouldn't go so far as calling this a consensus, but let's say that there are a lot of folks out there who think Apple won't refrain from putting iOS apps everywhere it can. You've probably all heard the iTV rumors already, but no one really knows how Apple can pull that one off. The idea of running apps on an multi-touch capable iMac on the other hand, is much simpler to grasp. And, according to a Patent Apple filed in Europe recently (that's unusual), it's exactly what Apple is thinking about for the "Apple iMac touch". The concept is quite incredible actually. While it might seem strange to use a straight standing iMac with your fingers, the possibility to swing it into a semi-flat position (as you can see above), would make it feel pretty much like a big iPad. Just imagine, you could answer your emails using the normal iMac mode and the keyboard, and then switch to iOS mode to read your RSS feeds on Reeder and graph that idea you had on sketches. Even better, what if you could unplug that screen part, making it just an iPad? Of course, keep in mind that this is just a patent. Yet, I'd totally buy that. What about you? 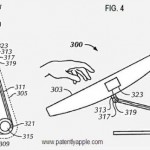 How Apple Could Bring iOS Apps To The Desktop

How Apple Could Bring iOS Apps To The Desktop
Nothing found :(
Try something else