You are using an outdated browser. Please upgrade your browser to improve your experience.
by Joe White
August 16, 2010
According to a recent article posted by Near Field Communications World, Apple has hired a new product manager for mobile commerce. However, the new guy (Benjamin Vigier) isn't just any old whiz; he's an expert in the development of near field communication technology (short range wireless communication technology). This may be a move that correlates with the whole host of NFC related patents Apple has been pushing over the last few months. These include an NFC powered mobile payments service (which would allow users to make payments directly from their handsets while at a restaurant, for example), and the Grab & Go patent (which is designed to facilitate file transfer between Mac, iPhone, and Apple TV). Indeed, as MacRumors reports, Benjamin Vigier has a heck of a lot of experience in the NFC field, making him the ideal candidate for the job in the wake of Apple's latest venture.

Most recently Vigier was product manager for mobile wallet, payment and NFC at US mobile payments specialist mFoundry. There he conceived and managed both the PayPal Mobile service and Starbucks' barcode-based mobile payments service and was also responsible for the development of mobile wallet applications for two top US mobile network operators and an NFC wallet application for a top three US bank.

So, what do you think about near field communications? Sounds pretty cool, huh? You can check out Near Field Communication World's full list of NFC related Apple patents below.

An NFC-based mobile payments service that lets consumers make payments to merchants and other consumers via a credit or debit card, directly from their bank account or using credit stored in their iTunes account. The 'iPay, iBuy and iCoupons' patents, describing a comprehensive mobile payments, mobile commerce and mobile marketing business based around an NFC-enabled iPhone. Products+, an NFC-based product marketing and promotions application. An airline ticketing and boarding pass application that describes an unmanned, automated airport ticketing and baggage counter kiosk and introduces the concept of an automated security checking process where users of the iTravel app could process themselves through the security clearance system and check themselves in at the boarding gate. The Grab & Go patent, designed to make it easy for customers to transfer files between devices such as the Mac, iPhone and Apple TV. An NFC-enabled iPod, games controller, TV and iPhone. An NFC-based concert, entertainment and sports venue ticketing application that includes exclusive bonus features for users of Apple's service.

Personally, I think the concert ticketing app sounds rather hot. What about you? Be sure to let us know which one you think sounds the coolest in the comments box at the bottom of this article! 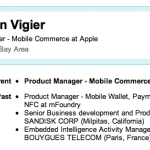 Apple Employs New Near Field Communications Expert
Nothing found :(
Try something else