You are using an outdated browser. Please upgrade your browser to improve your experience.
by Scott Grizzle
August 4, 2010 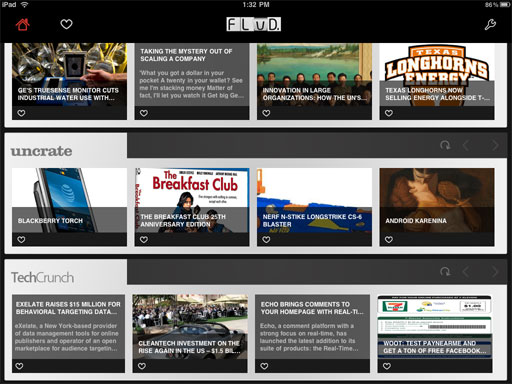 While Twitter clients were one of the most popular and most debated apps on the iPhone, news readers are the hot topic for the iPad. Apps like Flipboard, Reeder and Pulse have drawn the most attention so far, but a new app seeks to eclipse them all. Many apps have sought to turn the reading of news feeds into a magazine-style format. While Reeder went with a traditional news reader look, Pulse went with a very graphical, scrolling interface. Reeder has the most functionality, while Pulse and Flipboard seem to have traded in some features in favor of great-looking interfaces. No matter which app you chose, none of them seemed to live up to their full potential. News reader FLUD, which calls itself "the news ecosystem," may just be the app we've all been looking for. A relative latecomer, the looks and abilities of FLUD are similar to what we've seen in the other readers, but all combined in one app. The interface is similar to other apps, with the ability to scroll up and down through feeds, while scrolling right and left takes you through posts. The news items are shown as short excerpts overlaying an image from that story. Tapping on one loads up the text and images from the story via the source's RSS feed. 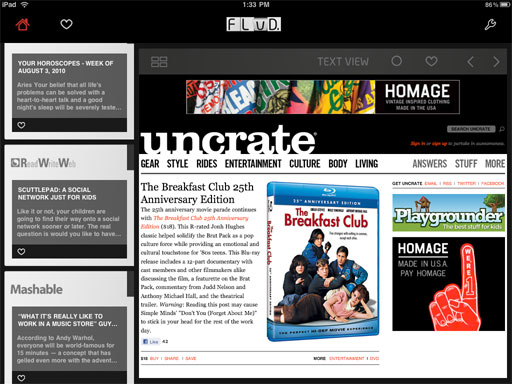 When you're reading a story, the top of the screen will have links for opening in Safari or flagging that you like the story. These popular stories are used to populate the top feed in the FLUD news reader. For instance, if a lot of FLUD users flag that they like a story on Digg, then anyone who is reading Digg through the FLUD app will see that story at the top of their screen. All of the articles that you flag will also be added to a bookmark view for later reviewing. Also within the app, you can view videos, share stories on Facebook and even email them to your friends. The ability to share on Twitter is one of the upcoming features. One place that FLUD really stands out is that you have full control over what sites you get your news from. In the current version, you can read from unlimited sites, unlike Pulse which limits your number to 25. You can even search for feeds on the Internet to add to your FLUD reader. Like the "send to Twitter" option, there are many great features coming up that will blow the competition out of the water. One such feature is the ability to manually enter any RSS feeds. This means everything from podcasts to blogs can be integrated in your feed along with major news sites and aggregators. The one feature that has really propelled other news readers in the past is the ability to sync with Google Reader. That ability will also be coming in the next version of FLUD, but in the meantime, the app will sync with its own servers to maintain your settings and bookmarks. Android and iPhone versions are also coming soon, which means you will have a consistent view across all of your devices. Its newcomer status may make FLUD the dark horse in the news reader race, but its current and upcoming features make it a safe bet to come out on top. You can get version 1.0 now for $3.99 in the App Store, and like me, you'll be anxiously awaiting the updates that will make this great app even greater.

FLUD
Made By Rabbit, Inc. 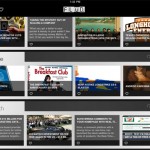 Is THIS The Best iPad News Reader?

Is THIS The Best iPad News Reader?
Nothing found :(
Try something else