You are using an outdated browser. Please upgrade your browser to improve your experience.
by Casey Tschida
August 9, 2010
We've all certainly heard developer's tales of app rejections and removals with a fairly sour opinion of the overall process and outcome, but today we have a different story. Tap Tap Tap posted a blog entry regarding a recent update submission to the App Store for their hit photography app, Camera+. The post outlines why a new feature they're looking to add was rejected and how they plan on going about it in a legitimate manner. What was the new feature?

VolumeSnap ~ use your iPhone’s volume controls to snap photos! Using Camera+ now feels just like a real camera. Your photos can be sharper because you can now hold your iPhone steadier with two hands instead of fumbling around for the shutter button on screen. In addition, you can plug your iPhone earphones in and use the volume buttons on them as a remote shutter control.

Sounds like a great idea to me. This typically isn't a problem while taking regular family or friend's pictures. When you're taking a photo of an object that you need to hold with one hand and holding your iPhone with the other, however, you'll likely find yourself stretching and curling a finger in an attempt to tap the take photo button. Same goes for needing one had to manipulate an item while trying to record a video of it. Anyway, I'm all for it. There's one little catch though, Apple doesn't allow you to use external buttons for anything other than what Apple has designed them for. It falls somewhere in the same realm as not allowing apps that duplicate functions of built-in apps. Why doesn't Apple allow this? They think it's confusing for the user.

That does seem logical. I'd still be okay with apps using these buttons for more, as long as it's clearly stated. For example, the users should simply be made aware that these buttons will function for this purpose instead of the normal volume higher and lower action. Despite this limitation, previous developers have been able to sneak this and other features by Apple's App Store review team by not including it in the description or screenshots. Later on, a developer could update their screenshots after being accepted. This has been a common practice to get non-approved features by Apple, but the risk is being permanently banned from the App Store and the developer program. Actually, Tap Tap Tap is glad Apple is being upfront about the whole situation and it being a legit reason to deny the VolumeSnap feature submission. Tap Tap Tap does plan on taking recourse but using the proper means and channels to achieve their goal. They claim this has worked before and it most certainly isn't impossible. The time frame for Apple to change their policies, if they do, is quite large. Tap Tap Tap encourages other developers looking to overcome this requirement to submit a similar feature request to Apple. Tap Tap Tap gives one final reminder that customers aren't left out of helping to get these features approved. iPhone customers have the ability to submit their own feedback as well. What's the next step? Well, to just wait and see what Apple's final decision is. All and all, I feel this is a great insight and explanation on how developers and iDevice users can legitimately combat Apple's restrictions without having to resort to just bypassing them. 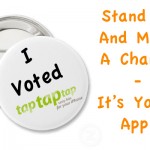