You are using an outdated browser. Please upgrade your browser to improve your experience.
by Joe White
August 31, 2010
If you're an iPhone 4 user, you probably remember the proximity sensor problem we told you about way back when Apple's latest handset was released. Many iPhone users were reporting issues with their handset during calls, citing the proximity sensor as being a key problem. Apparently the sensor wasn't always detecting the users' faces, meaning many were accidentally interacting with their phone's screen while talking on the handset. And, even though we'd heard from Steve himself that a fix was coming soon, neither iOS 4.0.1 or 4.0.2 tackled the problem. Unfortunately, a new wave of rumors have hit the web today, stating that this bug may not be fixed in time for Apple's upcoming iOS 4.1 software update, which promises to bring a few marked changes to the handset. Indeed, as The Next Web reports, an Australian spokeswoman for Apple has acknowledged the proximity issue, but has also confirmed that the issue will not be fixed in the upcoming iOS update. This is unfortunate news for afflicted owners, who've been battling with their iPhone 4 handsets since AntennaGate and beyond. You'd think Apple would be in a hurry to fix this bug before even more customers become disgruntled. After all, they changed our signal bars and closed the jailbreaking door pretty quickly, right? The obvious answer is that the proximity sensor problem is a work in progress, and one that's going to take a while to fix. If Apple fails to include a fix in its upcoming iOS 4.1 software update, hopefully we'll quickly see an iOS 4.1.1 update that does correct the problem. In the meantime, sit tight, and hold out for Wednesday. We're hoping Apple will be releasing iOS 4.1 then (after all, it is in its final beta testing stages), and if we're lucky, the proximity sensor issue will be fixed. If not, I guess we'll have to keep on holding our iPhones at forty-five degrees to our face when making calls, which shouldn't be too hard. After all, we've been doing it this long... 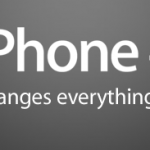 iOS 4.1 Won't Fix The Proximity Sensor Issue?
Nothing found :(
Try something else