You are using an outdated browser. Please upgrade your browser to improve your experience.
by Joe White
August 27, 2010
As many of you will already know, Apple is set to hold a Special Event next Wednesday, at which the company will announce its new range of iPods, as well as a brand new iPod touch. We've heard that the latter device will be able to partake in FaceTime calls (thanks to the addition of a front-facing camera), but what of the new iPod touch's design? Well, according to iLounge (who has a well-informed source), the new iPod touch should include a camera, a microphone, and it'll have a new design:

Think of the top of a MacBook Pro, only smaller, which is to say flat rather than curved at the centercloser to the look of the first-generation iPod touchs back, only with modifications.

The article also tells us not to hold out hope for a LED flash, and that, though the microphone isn't certain, it's more likely to be included than a flash. Additionally, the 2-inch touchscreen we saw not long ago is currently being thought of as a Nano touch, rather than a Shuffle touch. However, as iLounge states: "it doesn't make much sense." I guess we'll just have to wait until Wednesday. 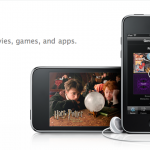 New iPod Touch Rumors Emerge, And Touchscreen Shuffle Or Nano?
Nothing found :(
Try something else