You are using an outdated browser. Please upgrade your browser to improve your experience.
by Joe White
August 1, 2010

Apple has finally closed its AntennaGate Hall of Shame webpage, which demonstrated the effect of the now infamous "death grip" on the iPhone 4 handset, and on a series of other rival smartphones. It has since been replaced with a bit of information regrading Apple's "black labs."  A small paragraph mentions the iPhone's antenna issue. It was common knowledge that Apple's competitors were very unhappy with the amount of attention they were receiving on Apple's antenna page (http://apple.com/antenna). One by one, over the past few weeks, a series of comments (and sarcastic ads) have been fired in Apple's direction from each company.

Indeed, it seemed the only thing keeping Apple's antenna issue in the media spotlight was the company itself, and the page which Apple continually updated with recently "death gripped" handsets. Now, Apple appears to be ready to bury AntennaGate in the back yard - which is where it rightfully belongs (despite the fact that the inter-company banter was kind of funny). The videos are still live on Apple's UK site though, so we can only assume that their complete eradication will come in time. If you're glad the chronicles of AntennaGate are finally coming to an end, let us know in the comments box below! 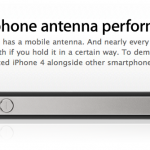 Rival Smartphone Videos Disappear From Apple's Antenna Page
Nothing found :(
Try something else