You are using an outdated browser. Please upgrade your browser to improve your experience.
by Joe White
September 17, 2010
If you're a fan of the popular iDevice game, Angry Birds, then you're in for a treat. So often, fans of the game are confronted with a level that seems to be downright impossible to clear. Sometimes, after 10 or maybe 20 attempts, it can be done. Others simply give up and never play the game again. However, there will soon be another potential outcome. Through an in-app purchase, Angry Birds gamers will be able to utilize the power of the Mighty Eagle; a creature who can clear an entire level for you with ease. Rovio Mobile, who developed Angry Birds, recently announced this upcoming feature at the Nokia World conference. Right now we're not sure how much the Mighty Eagle will cost iDevice gamers, or when it'll be available for hire. I'm not sure how many Angry Birds gamers will make use of this upcoming feature. I guess it all depends on how much the Mighty Eagle will be charging for his services. Yet, even if it is the base price of $0.99 (the price of game itself) I can see many considering this to be way too much. Remember guys: perseverance is priceless. Thanks to TUAW for spotting this! 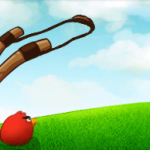 Angry Birds - New Mighty Eagle Will Clear Your Level, For A Price

Angry Birds - New Mighty Eagle Will Clear Your Level, For A Price
Nothing found :(
Try something else