You are using an outdated browser. Please upgrade your browser to improve your experience.
by Joe White
September 11, 2010
Apple's iPhone 4 Case Program has been running for a few months now, and each and every antenna issue afflicted Apple fan will have been able to order a free bumper (or other case) through the program's iPhone app. Way back at the Antennagate press conference, when Steve announced the Case Program, he made a point of adding that it would only run until September 30, 2010. This caused many to speculate as to whether Apple planned to release a new iPhone around this date, with a revised antenna design. The company's special event came and went, with no mention of a "new" iPhone 4. Since then, Apple has altered the content of its Case Program site, explaining that the program as we know it will end as planned on September 30. However, customers experiencing antenna issues may still apply for a free case through AppleCare. Here's how Apple puts it:

We now know that the iPhone 4 antenna attenuation issue is even smaller than we originally thought. A small percentage of iPhone 4 users need a case, and we want to continue providing them a Bumper case for free. For everyone else, we are discontinuing the free case program on all iPhone 4s sold after September 30, 2010. We are also returning to our normal returns policy for all iPhone 4s sold after September 30. Users experiencing antenna issues should call AppleCare to request a free Bumper case.

Apple does have a point. I know iPhone 4 owners who can't reproduce the antenna issue on their handsets, no matter how much they death grip the lower corner of the phone. Guys like that don't need a case, nor do they want one, the iPhone 4 looks beautiful as it is. Why would you want to cover it up? The great news is that those who still want a case, can get one - albeit an Apple Bumper (which I rather like, if I'm being honest). I half suspected Apple would just close the Case Program forever, even if they'd subtly tweaked the antenna design so newly shipped iPhones were miraculously "cured" of the affliction. Yet, it seems they're leaving the handset as it is, instead simply continuing to offer free cases to those affected by the dodgy design. Overall, the message Apple wants us all to hear is this: if you want a free case, order it before September 30, because it'll be a whole lot easier to do it now directly from your iPhone. However, if you're planning on getting an iPhone 4 soon, don't rush to purchase one unnecessarily; the Case Program will still be alive and kicking past September 30. You'll just need to speak to the guys at AppleCare in order to get one. You can check out Apple's revised Case Program page here, and be sure to let us know your thoughts (including whether your iPhone gives in to the "death grip") in the comments box below! 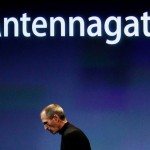 Antennagate Is History - Apple Brings Free Case Program To An End
Nothing found :(
Try something else