You are using an outdated browser. Please upgrade your browser to improve your experience.
by Joe White
September 2, 2010
As many of you know, Steve Jobs announced iOS 4.2 for the iPad at yesterday's special event, stating that the software update will be available come November. Following this announcement, Apple has updated the iPad section of its site to include information on the update.

iOS 4 is the world’s most advanced mobile operating system. And soon iPad owners will get to enjoy its 100+ new features and innovations — including multitasking, folders, printing, and more. Look for iOS 4.2 coming in November for iPad, iPhone, and iPod touch.

As Steve noted yesterday, the iOS 4.2 update will focus on bringing iOS 4 and all its features to the iPad. This means iPad users will be able to enjoy multitasking and folders on their beloved iDevice, which will be much appreciated indeed. Additionally, wireless printing and AirPlay (which allows users to stream media) will also be introduced in iOS 4.2. A unified mailbox and Game Center are included in the other major changes ready to hit the iPad. I can't wait for iOS 4.2. In fact, you could even say I'm disappointed that we have to wait until November for the much needed update. I don't think any of us really expected Apple to release iOS 4.2 yesterday, but it would have been nice. I guess in the meantime we'll have iOS 4.1 (which is scheduled to be released next week) to keep us going. Apple's iOS 4.2 site is available to now, so check it out. And, be sure to let us know your thoughts in the comments box below! 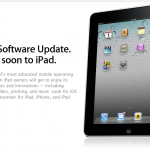 iOS 4.2 For iPad: Apple Posts Details On Site
Nothing found :(
Try something else