You are using an outdated browser. Please upgrade your browser to improve your experience.
by Casey Tschida
September 16, 2010
Apple's iOS 4.2, set for release sometime in November, will not only bring current iOS 4 features to iPads and add wireless video, photo, and audio streaming via AirPlay but, additionally, it will deliver a wireless printing system. Apple has released further details on their upcoming wireless printing feature and it's being named AirPrint. AirPrint will allow users to print directly from select iDevices to local printers without the need to first transfer documents to a computer. Apple's AirPrint service works alongside iOS 4's multitasking capabilities. This means that iPhone 3G users will once again be out of luck, officially speaking. What does that leave? AirPrint will be available to iPhone 3GS, iPhone 4, iPad, third generation iPod touch, and fourth generation iPod touch users once they've installed the free iOS 4.2 upgrade in November.

“AirPrint is Apple’s powerful new printing architecture that matches the simplicity of iOS—no set up, no configuration, no printer drivers and no software to download,” said Philip Schiller, Apple’s senior vice president of Worldwide Product Marketing. “iPad, iPhone and iPod touch users can simply tap to print their documents or photos wirelessly to an HP ePrint printer or to a printer shared on a Mac or PC.”

As with Retina and general iOS 4 multitasking support, AirPrint support isn't just automatic. Developers will need to add AirPrint APIs into their apps. Today, Apple has released a beta version of the AirPrint software, alongside the iOS 4.2 beta. Hopefully, this will allow plenty of time for developers to integrate this functionality by launch day. How seamless is this feature? AirPrint capable iDevices will be able to print to HP Photosmart, Officejet, Officejet Pro and LaserJet Pro series ePrint enabled printers by just using their wireless network.

“We’re pleased to work with Apple to bring Apple’s AirPrint to our fall lineup of ePrint printers in time for the holiday shopping season,” said Vyomesh Joshi, HP executive vice president, Imaging and Printing Group. “Making it easy for our customers to print anytime, anywhere, is a key priority for HP. iPad, iPhone and iPod touch customers are going to love how easy it is to print using our new range of ePrint printers, creating high-quality printed pages in an instant.”

It appears, as of now, that any other printer will require Mac OS X's Printer Sharing to become available to iDevices. Developers who've had a chance to look into AirPrint have noticed that it requires Mac OS X 10.6.5, which is currently in beta. Even the latest seed of 10.6.5 is being offered freely to iOS developers, starting today. That doesn't imply this will be a final requirement, but I fear if it is, we'll probably see a lot more upset Apple fans emailing Mr. Jobs. [Image via Apple.com] 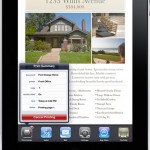