You are using an outdated browser. Please upgrade your browser to improve your experience.
by Joe White
September 1, 2010
It's a commercial world, right guys? And, nobody does commercials better than the mighty Apple, who's just announced a new line of iPods. Two of the new models, the iPod touch and Nano, have new TV commercials that have recently appeared on Apple's web site. Both commercials do exactly what you'd expect them to do: they make you want to buy an iPod. Heck, I've got an iPhone 4 and an iPad, yet I still want to hit Apple's online store and purchase one of these great new devices. Emphasis this time around is obviously on the iPod touch's camera, which is shown in the commercial shooting HD video in time with some cool music (Come Home, by Chappo). As many of you know by now, the fourth generation iPod touch comes complete with a camera, which allows the device to participate in FaceTime calls. Gaming is also featured in the commercial, as the fourth-gen iPod touch comes with a glorious Retina display (my favorite iPhone 4 feature). Last but not least, a tip of the hat is given to FaceTime, which closes the commercial:

The iPod Nano commercial emphasises the iPod's recently aquired mobility, which is centered on the device's newly added clip. Much like the iPod Shuffle, the Nano now comes complete with a clip, meaning users can attach the device to themselves without the need for an armband. As you can see from the commercial, Apple's proud of this new feature. FYI, the song playing in the Nano's commercial is Comfort Eagle by Cake. Anyone else think Steve's taste in music is pretty rad?

You can check out both commercials on Apple's site (iPod touch commercial and iPod Nano commercial). Be sure to let us know what you think of them in the comments box at the bottom of this article! 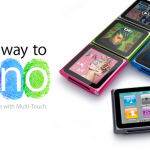 New iPod Commercials Appear On Apple's Site
Nothing found :(
Try something else