You are using an outdated browser. Please upgrade your browser to improve your experience.
by Joe White
September 11, 2010
If you were wondering exactly how Microsoft's employees celebrated Windows Phone 7 reaching RTM (release to manufacturing) status, then read on and weep. Because first on the party list, was kill the iPhone. With giant cardboard cut-outs of iPhone and BlackBerry devices in hand, jubilant Microsoft employees took to the streets in a mock funeral march. The procession supposedly signaled the end of the iPhone's reign as king of the mobile world (see image below). 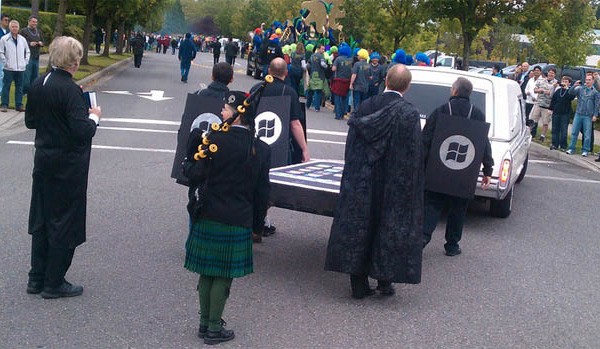 After walking around, dressed in black, holding a couple of cardboard handsets, Microsoft's best and brightest then proceeded to sing and dance to Michael Jackson's Thriller (see video below). I'm not going to tell you that this is in bad taste, because you've probably already made that judgement yourself. Instead, I'm just going to ask for you to post your thoughts in the comments box at the bottom of this article. 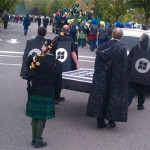 Microsoft Celebrates Windows Phone 7 RTM Status By Mourning The iPhone, And Dancing
Nothing found :(
Try something else