You are using an outdated browser. Please upgrade your browser to improve your experience.
by Joe White
September 1, 2010
Apple has just announced its fourth generation iPod touch, which comes complete with a camera (for FaceTime calling), and Retina display! Speaking from center stage at Apple's special event, Steve Jobs announced the latest generation of the company's popular iPod model, confirming what many had already believed. Following the recent iPod touch case leaks, we were pretty certain that the fourth generation of Apple's touchscreen iPod would include a camera for FaceTime capabilities. This is indeed a great feature, it opens the iOS-powered video calling world up to include iPhone 4 and iPod touch (4th-gen) users. However, Retina display is something else. We had an inkling that the new iPod touch might come complete with Retina display (check our rumor round-up if you don't believe me!), however Steve's recent confirmation of this suspicion is indeed brilliant news. I love the Retina display on my iPhone 4, and now new iPod touch owners can enjoy it too. And, with an App Store gradually filling more and more with Retina-optimized apps, there has never been a better time for Apple to introduce the fourth generation iPod touch. What's more, the new iPod touch also comes complete with a built-in gyroscope, meaning users can take advantage of the growing number of gyro-apps already available in the App Store. And, the fourth-gen iPod touch will be lightening fast, it's powered by the same A4 chip iPhone 4 handsets and iPads use. Also, great news if you love taking movies on the go - These new iPod touches will be available next week, and will start at $229 for 8GB. 32GB will retail at $299, and 64GB will be available for $399. We'll be updating this article if any more news becomes available, so be sure to check back regularly! 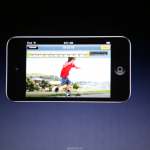