You are using an outdated browser. Please upgrade your browser to improve your experience.
by Joe White
September 1, 2010
Great news, iTunes fans! Apple has just announced the release of iTunes 10, a major upgrade to the company's popular music program, which brings with it several very cool features, and a new logo! And, what's more, the update is available today! Speaking from center stage at Apple's special event, Steve introduced the new version of iTunes, stating that the program now looks more "elegant and simple," with a new hybrid view that shows album art alongside tracks. Steve said:

We've made it even more elegant and simple. It looks even better.

Plus, the new version of iTunes includes a cool new social feature called Ping. Essentially, Ping is like Facebook and Twitter plus iTunes. Through Ping, users can follow friends and share music. Steve has stated that Ping can be as personal or public as you like. It seems as if Apple's focus is on the social aspect of music discovery, something Ping grants. Steve added:

Ping is super easy to use. It is a social music discovery feature that lets you follow people or be followed.

You can follow friends, artists or both, and find out exactly what they're listening to. Additionally, Ping comes with its own song and album charts, much like the well known Twitter trends, along with a news feed and concert listings. In addition, Ping will also be available for iPhone and iPod touch! We'll be updating this article as soon as more information becomes available! [gallery] 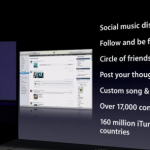