You are using an outdated browser. Please upgrade your browser to improve your experience.
by Casey Tschida
September 1, 2010
Apple released the latest revision of the Apple TV. Is also stands for a new move by Apple. Unlike the previous Apple TV, this latest iteration doesn't have any storage abilities. What does that mean? It means that everything will be based off streaming content. On that note, Steve announced that the Apple TV will only allow rentals now. Rentals however, are now even cheaper. HD TV Shows will be only $.99 to rent and just released movies in HD, will be set at a price tag of $4.99, with the cost reducing over time. Apple is also now embracing the Netflix streaming service. Very awesome, and interesting. As before, the Apple TV can stream content from your computer running iTunes. If that weren't it, the new AirPlay allows streaming from your iDevice to your computer running iTunes. Not a complete 'cloud' solution as some expected, and hoped, but it does appear that Apple is moving closer and closer to that possibility. Do you like the fact that content is becoming less and less local - storage wise? Are you happy with these new abilities or still aching to get your music streaming over the Internet? 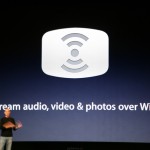 Special Event: Streaming Is The New Fad, And Becoming More Affordable
Nothing found :(
Try something else