You are using an outdated browser. Please upgrade your browser to improve your experience.
by Alexander Vaughn
November 9, 2010
Facebook has been holding a lot of events lately, and unveiling tons of new features. One thing they still haven't gotten around to launching is an official iPad app. Knowing how popular Facebook is on the iPhone, and the flourishing market for third party Facebook iPad clients on the App Store, there is definitely a need. Now, it may be right around the corner. As reported by Macstories, yesterday Facebook sent out invitations to the press for a special event happening on Wednesday. Officially announced to be focused on "mobile," the rumors of an iPad app launch are growing stronger than ever. There is also some chatter about an official Facebook phone, running on Android, but the company has denied this rumor so far, so we're really in the dark. It will be very interesting to see what they come up with for the iPad. Their iPhone app is really good. However, their lead developer Joe Hewitt who originally developed it (virtually on his own), has quit the project. Will his replacement be up for the task? We'll be sure to let you know what happens. 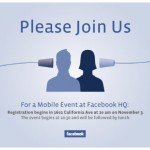 Rumor: Facebook To Launch An Official iPad App Next Wednesday

Rumor: Facebook To Launch An Official iPad App Next Wednesday
Nothing found :(
Try something else