You are using an outdated browser. Please upgrade your browser to improve your experience.
by Joe White
November 18, 2010
Apple has announced its European iAd partners in a statement which was released recently. As The Telegraph reports, the first European retail partners include: L’Oréal, Renault, Louis Vuitton, Nespresso, Perrier, Unilever, Citi, Evian, LG Display, AB InBev, Turkish Airlines and Absolute Radio. iAd is set to launch in the UK and France in December, "with Germany following in January." So, if you're living in one of the former countries, keep your eyes peeled, because iAds are coming your way. A few days ago, we heard that the high price of advertising via iAds had resulted in a "mixed reception" towards the service in Europe. Furthermore, Apple had been labeled as being “a pain to deal with.” Regardless, Apple has obviously managed to secure European interest in its iAd service. We'll be reporting on the progress of iAds in Europe as we approach the time of the service's launch. In the meantime, be sure to let us know your thoughts on iAd in the comments below. 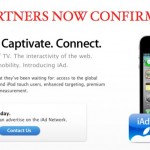 iAds In Europe: Partners Now Confirmed
Nothing found :(
Try something else