You are using an outdated browser. Please upgrade your browser to improve your experience.
by Joe White
November 1, 2010
If your European iPhone's Clock application isn't behaving itself, then you may have been struck by a new iOS bug which has been brought on by the recent daylight saving time. Today, we're hearing that many iPhone owners living in Europe have had their schedule disrupted by the bug. Instead of their alarm sounding off on time, iDevices across Europe have been buzzing an hour late this morning. As 9to5Mac reports, Apple will be fixing this issue in an upcoming version of its iOS. Until then, you can apparently fix the bug yourself by simply deleting and re-adding your alarms. Not long ago, we told you how Australia had been affected by the same problem. Hopefully Apple will be sending out a fix soon, though we may just have to wait for iOS 4.2, which is scheduled for a November release. If you've been affected by this annoying bug, let us know in the comments below! 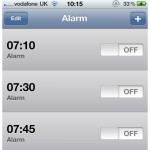 iOS Alarm Bug Hits Europe?
Nothing found :(
Try something else