You are using an outdated browser. Please upgrade your browser to improve your experience.
by Joe White
November 20, 2010
According to a variety of reports picked up by MacRumors, iPad 2 production is set to begin in February, following a gradual decrease in first-gen iPad production over the next two months. Furthermore, Apple is rumored to have adopted a "world mode" GSM/CDMA chip from Qualcomm. As Wedge Partners analyst Brian Blair writes:

Recent checks... suggest Apple is going to be ratcheting down production of the existing 3G iPad over the next two months in anticipation of ramping up a new World iPad that is powered by Qualcomm and will run on both GSM and CDMA based networks around the world.

The second generation iPad is set to be thinner than the current model. Blair noted that the iPad 2 will require a new manufacturing process in order to create the new unibody design. It has also been claimed that the iPad 2 will include a forward-facing camera for FaceTime, as predicted. As of this moment, nobody is sure whether the device will include a rear-facing camera - even though this, too, has been rumored. What do you think? Let us know your thoughts on the iPad 2 rumors in the comments below. 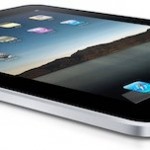 iPad 2: Production To Begin In February?

iPad 2: Production To Begin In February?
Nothing found :(
Try something else