You are using an outdated browser. Please upgrade your browser to improve your experience.
by Joe White
December 14, 2010
Apple is showing off its iAd advertising service today, with a preview of how advertisements will look when the service launches on the iPad in 2011. Quite aptly, Apple is demonstrating the future of advertising by basing its first iAd around Tron Legacy, a move which has been hailed for its futuristic qualities. The movie iAd, which started appearing within some iPad apps today, takes over the iPad's full screen when it appears. The advertisement itself features "over ten minutes of video, images from the movie, a theater locator with showtimes, and a preview of the movie soundtrack with the option to purchase on iTunes without leaving the ad," according to AdAge. Clearly, Apple's iAds for the iPad are going to be impressive when they launch in 2011. Currently, iAds on iPhone handsets are only available in the U.S., U.K., and France. However, in 2011, Germany and Japan will get iPhone iAds, too. Have you spotted the Tron Legacy iAd yet? Let us know in the comments. [Image credit: AdAge] 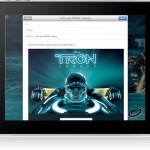 Apple's First iAd For The iPad Previews Today: Tron Legacy
Nothing found :(
Try something else