You are using an outdated browser. Please upgrade your browser to improve your experience.
by Joe White
December 1, 2010
If you’re new to the iPhone, iPad, or iPod touch, then you’ve probably got over a hundred questions regarding your shiny, new device. Here at AppAdvice, we strive to answer them one question at a time, each and every day. This is iOS 101, and class is about to begin. One of the most important aspects of owning an iDevice, is syncing and updating it. While it is possible to live without syncing, by downloading all your music and apps from the iTunes and App Store apps, syncing places all your tracks in iTunes. And, it also means you can install select iOS applications from the vast number you'll accumulate over time. This is especially important for those of you who have iDevices with limited storage capacity. You see, with Sync, you can quickly and easily choose exactly what you want to transfer onto your iPhone, iPad, or iPod touch. Personally, I have over 50GB of music in my iTunes library, and around 12GB of iOS applications. It would be impossible for me to carry everything around on my 16GB iPhone 4. However, thanks to Sync, I can throw a couple of apps on my iPhone, and an album or two, in no time at all. Updating, too, is essential. Thankfully, Apple is continually turning out new versions of its mobile operating system, iOS, for users to download, install, and use. A prime example of this is iOS 4.2 (technically iOS 4.2.1), a "unification" update which was released recently. This new version of the iOS brought a whole load of new features to the iPad, Apple's 9.7" touchscreen device. It was therefore more important than ever for iPad owners to download and install iOS 4.2. Later on in this class, we're going to look at how you can update your iDevice. But, first, let's take a look at syncing. 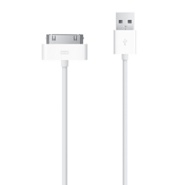 In order to sync your iDevice, you first need to plug it into your PC or Mac using a USB cable. If you bought your iDevice second-hand, and it didn't come with a USB cable, then you need one. Apple sells their own cable for $19.00, though you can pick one up on Amazon for under $2.00. You can also pick up power adapters for your iDevices, which are great, as they make charging your iDevice a much quicker (and less painful) task. Next, you need to open up iTunes. If you own a Mac, then iTunes comes preloaded with Mac OS X. However, if you own a PC, then you'll need to head over to Apple's downloads page, and get yourself a (free) copy of iTunes. Once you've got iTunes installed, then you're ready to proceed. You've plugged your iDevice USB cable into the USB port on your PC or Mac, and you've plugged the other end into you iPhone, iPad, or iPod touch. Now, your iDevice will sync - though as of yet, we won't have specified exactly what we want to happen when we next sync the iDevice. However, before we get to this, let's take a look at the iDevice page in iTunes. As you can see from the screenshot below, the iDevice page in iTunes shows off a lot about your iDevice. I've circled important aspects in red, which we'll discuss now. 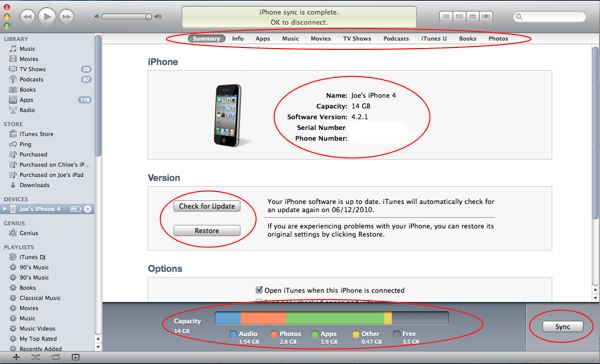 Starting at the top of the page, and heading down, you've got: So, say for example you want to put a Bruce Springsteen album on your iPhone, then add the AppAdvice app, too. Here we're presuming you've already bought both the album, and the app, from iTunes. In the iDevice page, at the top of the screen, hit the "Music" button. This will take you to the following page: 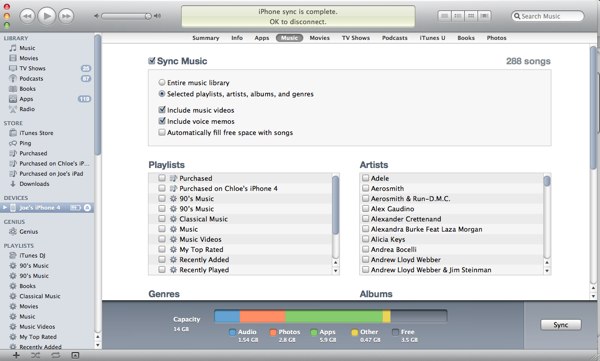 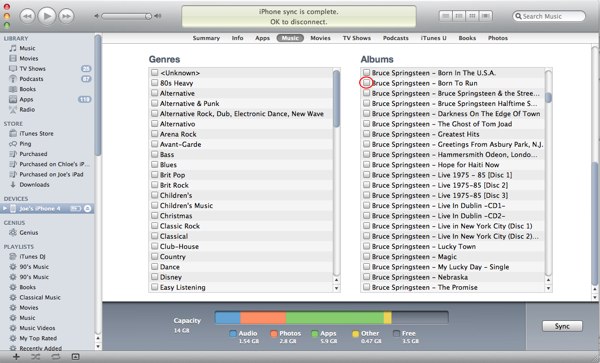 Alternatively, you can choose to sync everything in your music library. This can be done in the "Music" page, by checking "Sync Music," then "Entire music library." However, if you'd rather manually select the music yourself (as detailed above), instead select "Selected playlists, artists, albums, and genres." Installing an iOS application on your iDevice is just as easy. Simply head over to the "Apps" section, by clicking the "Apps" icon towards the top of the page (next to "Music"), and you'll be presented with an interesting page. On the left side of the page, you'll find a list of the iOS apps you currently own. On the right, you'll see a preview of what your iDevices Home screen (and other screens) will look like, following the sync. If you want to sync applications with your iDevice, you must first check "Sync Apps" at the top of the page. Following this, simply check which iOS applications you'd like to sync to your iDevice. So, for the AppAdvice app, you'd scroll down the list until you found the app, and check the box next to it. What could be easier? 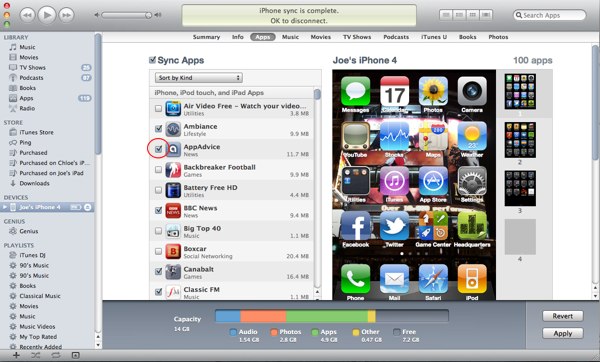 Unsurprisingly, syncing movies and TV shows can be done in almost exactly the same way. Now, let's take a look at updating your iDevice.

As mentioned, Apple sends out new versions of the iOS all the time, which is why it's important to know how to update your iDevice. Earlier, we took a look at the iDevice screen in iTunes, which can be accessed when your iPhone, iPad, or iPod touch is connected to your PC or Mac. If iTunes hasn't told you that there's an update for your iDevice available, you can check yourself, by hitting the "Check for Update" button: 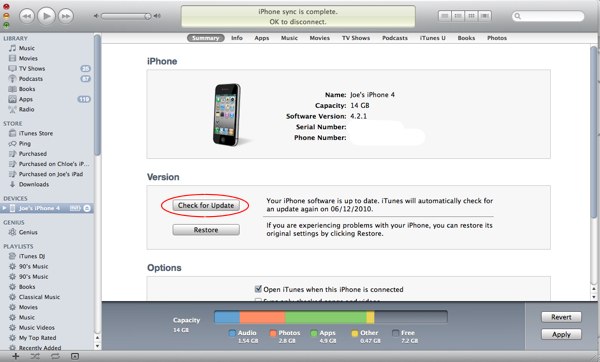 If an update is available, you will then be asked if you would like to download and install the update. Agreeing to this will initiate the iOS download. Once this has been completed, iTunes will update your iDevice's firmware.

The update process can take some time, so be patient. And, an important note: don't unplug your iDevice while it's updating! Be sure to leave it plugged into your PC or Mac, until iTunes has finished the process. Just underneath the "Check for Update" button, is another button: "Restore." If you run into problems with your iDevice; if it has slowed down significantly, or is behaving erratically, a restore will usually fix whatever issue you've encountered. Essentially, iTunes will wipe everything off your iDevice, restore it to factory settings, then sync your iDevice - adding everything that's been removed. In order to perform a restore, simply hit the "Restore" button, then confirm this with the pop-up:

However, if you do have to restore your iDevice, be sure to sync it up with iTunes first. This way, anything you erase will be transferred back once the restore is complete. Alternatively, you can choose not to re-sync your device following a restore, effectively setting it up as a new device. This is ideal if you're selling your iDevice, through eBay or to a friend. And, with that final explanation we come to the end of today's class. Thanks for reading through today's iOS 101, we hope its been helpful. If you're new to the world of iPhones, iPads, or iPod touches, feel free to recommend an iOS 101 lesson in the comments below, and we'll try to cover it as soon as possible. 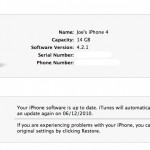 iOS 101: iTunes - How To Configure Sync, And Update Your Device

iOS 101: iTunes - How To Configure Sync, And Update Your Device
Nothing found :(
Try something else