You are using an outdated browser. Please upgrade your browser to improve your experience.
by Joe White
December 10, 2010
Several alleged iPad 2 cases have hit the web, showing room for a rear-view camera, an audio jack, a single dock connector, and one other "mysterious" feature. As you can see in the above image, and in the video below, a rear-view camera is pretty much certain now. The second generation iPad is also expected to include a front-facing camera too, for FaceTime video calls. Both cameras are rumored to be provided by OmniVision. The single dock connector means we won't be able to "sideways dock" our second-gen iPad in the way many had hoped. Personally, I think two dock connectors would have made the device look ugly anyway. Additionally, a single audio jack was expected. However, this "mysterious slit" (which can also be spotted in the video below) is certainly something of an enigma. Engadget speculates that it could correspond to a revised speaker position. Alternatively, it could correspond to the iPad 2's 3G antenna. Who knows? We'll be posting more news on the second generation iPad when it becomes available. In the meantime, let us know your thoughts on the iPad 2 rumors in the comments. And, be sure to check out the video below. 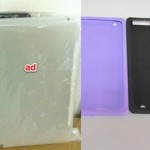 iPad 2: Supposed Cases Appear?
Nothing found :(
Try something else