You are using an outdated browser. Please upgrade your browser to improve your experience.
by Joe White
December 4, 2010
Apple is reportedly working on a location-based iOS radio application. The news comes following a post by Patently Apple, which shows an Apple patent for a location-based radio app. As you can see in the above image, one iPhone screen shows a generic radio app display. However, on the left, a map-like screen displaying the location of various nearby radio towers is shown. Patently Apple notes:

Apple being Apple, we could always expect something different, and in this case they're thinking of introducing us to a unique radio station mapping function that acts as an alternative to a straight scrolling list of radio stations.

Obviously, if you're at home, this feature isn't going to help you much. However, a location-aware radio app could be useful if you're driving around, and want to find out which radio station's signal is the strongest. As you can see in the above image, Apple is using semicircles to represent signal strength. Many of Apple's patents amount to nothing at all, and that could easily be the case with this one too. However, back in August, we heard the iPhone might be getting an FM radio chip. And, Apple patented a cloud-based radio broadcast system back in October. So, perhaps an Apple radio app could be a reality - though whether it will be location-aware, is another question altogether. What do you think? Let us know in the comments below. 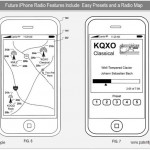 Patent Watch: Apple Working On Location-Aware Radio App
Nothing found :(
Try something else