You are using an outdated browser. Please upgrade your browser to improve your experience.
by Joe White
December 23, 2010
According to a recent rumor, the second generation iPad will be "flat like an iPod touch," slightly smaller and will feature a "large wide-ranged speaker unit covered with metal mesh." The rumor, published by MacOtakara, reportedly comes from an "anonymous Chinese source." Apparently, the second generation device will be 3mm smaller than the current iPad, which is 242.8mm by 189.7mm. The rumored speaker unit would certainly explain the supposed iPad 2 cases we told you about last month. Other speculations made by MacOtakara include a new position for the ambient light sensor, which has apparently been relocated to the "upper center of the rear panel." The rumor that the iPad 2 would have a front and rear-facing camera is labeled by the blog as being "unreliable information." We'll keep you posted on all the iPad 2 rumors as they become available. In the meantime, let us know if you're planning on buying the second generation iPad in the comments below. 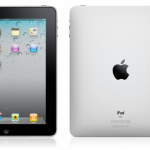 Rumor: iPad 2 - Flatter, Smaller, Louder?
Nothing found :(
Try something else