You are using an outdated browser. Please upgrade your browser to improve your experience.
by Joe White
December 10, 2010
According to multiple sources, Apple's second generation iPad will have both front and rear-facing cameras, for FaceTime video calling. This latest iPad 2 rumor is nothing new; we first reported on rumors of the second generation iPad's front-facing camera in October. Back then, it was rumored that OmniVision would provide both the front and rear-facing cameras in the iPad 2. Now, Reuters has also noted that a camera equipped iPad is in the works. Supposedly, the device will feature both front and rear-facing cameras, which are now rumored to be provided by Genius Electronic Optical CO and Largan Precision Co. It has also been noted that iPad 2 production could begin as early as Q1, 2011. This fits in with the supposed iPad 2 cases we told you about earlier today. Images of the alleged cases show a space for a front-facing camera, as rumored. We'll keep you posted on all the iPad 2 news we hear. In the meantime, let us know your thoughts regarding the second generation iPad rumors in the comments below. And, thanks to AppleInsider for spotting this. 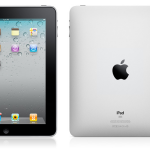 Rumor: iPad 2 Will Have Front And Rear-Facing Cameras?

Rumor: iPad 2 Will Have Front And Rear-Facing Cameras?
Nothing found :(
Try something else