You are using an outdated browser. Please upgrade your browser to improve your experience.
by Joe White
December 2, 2010
The BBC will soon launch a global subscription-only version of its online "iPlayer" service, initially as an iPad application. If you're not familiar with BBC iPlayer, it's a service in the UK via which residents can watch BBC TV, and listen to BBC radio, online. Shows such as Doctor Who, Wallace and Gromit, and The Apprentice, are made available following their initial broadcast. Once online, users can view shows on their computer, or on their iDevice using Safari. The best thing about iPlayer for UK residents, is that it comes at no extra cost: iPlayer is covered by the TV licensing fee UK residents must pay. Over in the states, services such as Netflix and Hulu Plus have satisfied TV addicts for a while now, yet there are some shows which still cannot be accessed online. For a fee, the BBC is promising to deliver iPlayer to the rest of the world, in the near future. Here's what BBC.com Managing Director Luke Bradley-Jones told the Digital TV Summit, as reported by paidContent:UK:

There’s a general acknowledgement in the world of VoD that there needs to be a hybrid business model – a combination of subscriptions, download to own and pay per view. I can see the value of that view and I believe it’s the way that the global iPlayer will go in the medium term. However I can announce here that we’re going to be adopting a pure paid subscription model for the global iPlayer for launch – in part to get audiences used to using the service, but more importantly so we can generate additional value from the service in terms of the user data that it gives us. We will also offer advertisers the chance to partner with us on the ‘free’ areas of the service.

As the same report notes, the BBC "appointed a global iPlayer launch director in September, after corporation director-general Mark Thompson set a 12-month deadline on the project’s delivery." A global iPlayer service is most definitely on its way. The only question on our lips, is: how long will it take to launch? We'll keep you posted on this as more news becomes available, so check back with us for updates! 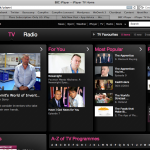 Special Report: BBC Plans To Launch Subscription-Only iPlayer In U.S.?
Nothing found :(
Try something else