You are using an outdated browser. Please upgrade your browser to improve your experience.
by Joe White
January 22, 2011
A total of 10 billion iOS applications have been downloaded from the App Store. Over at Apple's counter page, the above message is displayed. As of this moment, we don't know who won the contest; Apple plans to announce the winner at a later time. Apple's message reads:

Thank you. Ten billion times. The 10 Billion App Countdown promotion has ended. Please come back to this page later to see who won.

Recently, Apple launched the "10 Billion App Countdown," promising a $10,000 iTunes Gift Card to whoever downloaded the 10 billionth application. Today, the milestone was passed, a mere two and a half years since the App Store premiered. Interestingly, it took the iTunes Store almost three times longer to reach the same milestone. We'll keep you posted on the status of the contest. Alternatively, keep checking Apple's webpage to see if you won the competition! 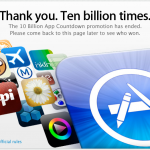