You are using an outdated browser. Please upgrade your browser to improve your experience.
by Joe White
January 21, 2011
Apple's second generation iPad will reportedly feature a rear facing one megapixel camera, similar to that of the iPod touch (4G). As you can see in the above image, the news was uncovered in the latest SDK by 9to5Mac. The front facing camera, which will be used primarily for FaceTime video calls, is a VGA camera (similar to the iPhone 4, and iPod touch). The iPad 2's rear facing camera will allow users to record 720p HD videos. Furthermore, the front facing VGA camera will allow for video recording too. Specific iOS apps that require a camera (such as augmented reality applications) will be affected by the quality of the iPad 2's built in camera. Furthermore, the size of the iPad's screen will only serve to highlight its poor, one megapixel quality. Personally, I never imagined myself taking photographs with the iPad 2; however, a higher quality camera would have been appreciated by Apple fans. What do you think? Let us know in the comments. 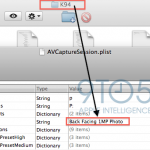 Apple's iPad 2 To Feature Same Cameras As iPod Touch?
Nothing found :(
Try something else