You are using an outdated browser. Please upgrade your browser to improve your experience.
by Joe White
January 8, 2011
Kevin Rose recently stated he has it "on good authority" that Apple will be announcing the iPad 2 in "3-4 weeks." Additionally, he has noted that the device will feature two cameras (front and back), and a "higher dpi."

I have it on good authority that Apple will be announcing the iPad 2 in the next "3-4 weeks", possibly Tuesday February 1st. The iPad 2 will feature a retina display and front/back cameras. [sic]

The news appeared on Kevin Rose's blog. However, since posting, the Digg founder has amended the entry, adding:

UPDATE: Spoke w/another source, the display has a "higher dpi", but not technically a retina display. This seems odd to me, we'll have to wait and see.. [sic]

It's unlikely Apple will vastly increase the resolution of the iPad. In short, it would be impossible to do this while maintaining the screen's size (9.7-inches), and still keep the cost of the tablet down. Already, the iPad has a resolution of 1024 x 768; this is impressive. To increase the screen's resolution even more would be nice, however it would also be costly. The belief that the iPad 2 will feature dual cameras for FaceTime is certainly very popular at the moment. So far, the supposed iPad 2 cases we've seen have had space for front and rear facing cameras. It would make sense for Apple to expand FaceTime even further, and make it available on the iPad. For this to happen, the second generation device will need at least one camera. At this moment, nobody is exactly sure what the iPad 2 is going to be like. However, if Rose is right, we haven't got too long to wait until we find out. Let us know your iPad 2 predictions in the comments below. 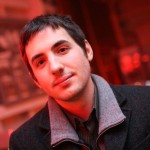 Kevin Rose: iPad 2 Will Be Announced In "3-4 Weeks"
Nothing found :(
Try something else