You are using an outdated browser. Please upgrade your browser to improve your experience.
by Joe White
January 29, 2011
The iPad 2 will not feature an SD card slot, according to a "source." Instead, the slot we thought was reserved for an SD card, is instead designed for the iPad 2's SIM card. Various leaked iPad 2 cases have shown space for a "potential SD card slot," located around the top left corner of the iPad. However, an AppleInsider source disagrees:

In a mockup analysis of all the openings and recesses in those cases, it was speculated that that left-side opening could represent the much-rumored SD Card slot. However, a person that AppleInsider trusts on matters such as these has since rebutted that notion, stating instead that the break in the next-gen iPad enclosure at that location is actually a relocation of the tablet's SIM card slot. (This could signal a smaller logic board in the next iPad and better battery life via and [sic] even larger battery).

Apple's second generation is rumored to be "flatter, smaller, and louder." Furthermore, many expect the device to include front and rear facing cameras, for FaceTime. Personally, I wouldn't be particularly bothered if the iPad 2 doesn't come with an SD card slot. Would you? 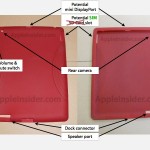 "Source" Claims iPad 2 SD Card Slot Is Just A Rumor
Nothing found :(
Try something else