You are using an outdated browser. Please upgrade your browser to improve your experience.
by Joe White
February 17, 2011
According to a recent report by Digitimes, Apple has secured 60 percent of the "global touch screen capacity," leaving other companies in the industry struggling to get hold of supply.

Sources from tablet PC makers also pointed out that the component shortage is causing their shipment volumes to be unable to catch up with their orders, especially for second-tier players. Touch panels are currently suffering the most serious shortage due to Apple holding control over the capacity of major touch panel makers such as Wintek and TPK, and with US-based RIM, Motorola and Hewlett-Packard (HP) also competing for related components, second-tier players are already out of the game, the sources noted.

Obviously, this is good news for Apple - if "second tier players" can't get hold of touch screens fast enough, competitive tablets are going to fall behind. Furthermore, if Apple is planning on hitting its "40 million iPads in 2011" goal, the company is going to need all the touch screens it can get. It was recently revealed that Apple is the number one PC manufacturer, thanks to the iPad's impressive sales. This places Apple ahead of HP, Acer, Dell, and Toshiba. If iPad sales continue to increase in 2011, this is obviously a position Apple is going to maintain for some time. We'll keep you posted. 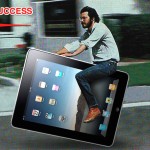 Apple Grabs 60 Percent Of Global Touch Screen Supply
Nothing found :(
Try something else