You are using an outdated browser. Please upgrade your browser to improve your experience.
by Joe White
February 24, 2011
In a recent patent application, Apple included a preview of its "E-Wallet" app icon. The mobile payment application is expected to launch with a future NFC capable version of the iPhone. We first heard about the possibility of an E-Wallet iOS app last year, when Apple hired an expert in Near Field Communications (NFC). This form of technology would essentially allow Apple to develop "proximity aware" iOS devices. One of the major features of an NFC capable device would be its ability to interact with a mobile payment system, as demonstrated in the video below. Visa started testing NFC powered mobile payment systems in Europe, using modified NFC capable iPhones. Furthermore, a variety of sources have noted that both the iPhone 5 and iPad 2 will be NFC capable. The presence of an E-Wallet icon in the above patent suggests that a mobile payment app is coming to the iPhone very soon - though we won't know for sure until WWDC '11. And, we'll obviously find out if the iPad 2 will be NFC capable at the beginning of March, when Apple holds its recently announced media event. In the meantime, take a look at the NFC mobile payment demo video below, and let us know your thoughts in the comments. 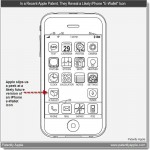 Apple's "E-Wallet" Icon Is Found Hiding In A Recent Patent

Apple's "E-Wallet" Icon Is Found Hiding In A Recent Patent
Nothing found :(
Try something else