You are using an outdated browser. Please upgrade your browser to improve your experience.
by Joe White
February 24, 2011
According to a variety of reports, Apple recently told shareholders that its massive North Carolina data center is for iTunes and MobileMe. Furthermore, the company confirmed that the one billion dollar facility will open "any day now." The news came at Apple's annual shareholders meeting yesterday, which AppleInsider reportedly attended. According to their website, Apple confirmed that the North Carolina data center will launch in the immediate future, and that it will serve as the company's second data center. Apple's first data center is located in Newark, CA, and was originally built for MCI WorldCom - a telecommunications company. More importantly, Apple confirmed that the North Carolina data center will support its iTunes and MobileMe services. For a while now, many of us have been expecting Apple to launch a cloud based version of iTunes. Speculation initially began last year, when Apple bought and shut down the online music streaming service, LaLa. It appeared as if Apple was attempting to pave the way for its own online music streaming service, which many websites dubbed "iTunes Cloud." Following the closure of LaLa, we heard about Apple's North Carolina data center, and though nothing was officially confirmed by Apple, started getting excited for the real possibility of a cloud based version of iTunes. Time passed, and Apple's work on the North Carolina data center continued. Then, earlier this month, news of "an improved MobileMe service" hit the Web. According to The New York Times, Apple is planning on launching a free, enhanced version of MobileMe, which would allow users to store music, photos, and files online in the “cloud.” It therefore comes as no surprise to learn that Apple's North Carolina data center will support iTunes and MobileMe. If a cloud based version of iTunes is coming, along with an enhanced version of MobileMe, the massive data center will certainly be needed. Hopefully, we'll see the launch of these features soon. Who knows, maybe Apple will announce both, at its March 2 media event? We'll keep you posted. 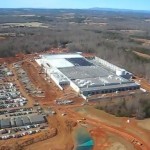 Apple's North Carolina Data Center: For iTunes And MobileMe
Nothing found :(
Try something else