You are using an outdated browser. Please upgrade your browser to improve your experience.
by Joe White
February 8, 2011
The official BBC iPlayer iOS application will launch Thursday, according to a recent Twitter post by BBC Interactive Operations Engineer Geoff Marshall. We first heard about the upcoming application back in December. From what we understand, the universal application will be free for UK TV licence payers to use. Furthermore, it will be available in the U.S. - but for a price. Here's what the Managing Director of BBC's official website said regarding a global version of the app:

I can announce here that we’re going to be adopting a pure paid subscription model for the global iPlayer for launch – in part to get audiences used to using the service, but more importantly so we can generate additional value from the service in terms of the user data that it gives us.

Yesterday, we heard that the application will be available in the App Store via a Twitter update from Geoff Marshall (BBC's Interactive Operations Engineer). He said:

iPlayer App for iPad is being released this Thursday - 10th Feb. 3G connection is browse only. Browse+Playback requires Wi-Fi. #iplayer

Unsurprisingly, the application will require a Wi-Fi connection in order to play content. However, users will be able to browse through content when connected to a 3G network, which is a handy feature. Obviously, as of this moment, the details are scarce. We'll be reporting on the release of the app come Thursday, so check back with us. 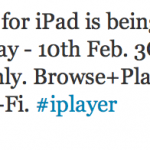