You are using an outdated browser. Please upgrade your browser to improve your experience.
by Joe White
February 1, 2011
Here's an interesting and perplexing statistic for you: 26 percent of iOS applications are only used once. The data comes from analytics firm Localytics. They have studied thousands of mobile handsets using their analytics service. The results show that throughout last year, the number of apps that were used only once rose steadily from 22 percent in Q1, to 28 percent in Q4. On average, 26 percent of iOS applications were only used once in 2010. Why? Obviously, first impressions matter to iOS fans. If a user installs an app, and isn't impressed, a large chunk of them aren't ever going to give it a second chance. This is why it's incredibly important for iOS developers to ensure that their app's first impressions count. Which means no app crashes, no bugs, and generally an all around great experience. That's what will keep users coming back again and again. How many apps have you only launched once? Let us know in the comments. 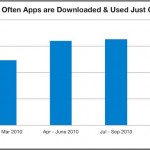 First Impressions: 26 Percent Of iOS Applications Are Only Used Once

First Impressions: 26 Percent Of iOS Applications Are Only Used Once
Nothing found :(
Try something else