You are using an outdated browser. Please upgrade your browser to improve your experience.
by Joe White
February 28, 2011
Jonathan "Jony" Ive, Apple's Senior Vice President of Industrial Design, could be considering leaving the company and moving back to England. The news came yesterday from British newspaper, The Times; they note Ive could sell around $30 million in Apple shares. The SVP received the shares in 2008, back when Apple's stock was around $100, as part of a "golden handcuffs" grant. Since, the variety of products Ive designed. including the iPhone and the iPad. have helped APPL increase dramatically. According to the newspaper, Ive is unhappy living away from England, and wants to spend more time in his native country - where he owns a four million dollar manor house in Somerset. Furthermore, Ive wants to educate his twin sons in England. However, if the SVP returns to England, he may forfeit his role at Apple. As noted by one anonymous source, Ive "is just too valuable to Apple ... they told him in no uncertain terms that if he headed back to England he would not be able to sustain his position with them." Once Ive is eligible to sell his Apple shares, the SVP's net worth would be around $128 million. Who needs Apple Inc. when you're sitting on a goldmine as big as that? Obviously, we don't want Jonathan Ive to leave Apple. His influence can be seen in pretty much every major product the company has produced this side of the millennium. Furthermore, if Ive did leave Apple, who would design future iPhones? Hopefully, Ive and the Apple board can come to some sort of agreement. If not, it seems apparent that Jonathan Ive has enough cash to retire, even though the SVP is only 44. We'll keep you posted. 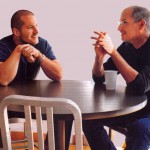 Jonathan Ive Considering Relocation To English Countryside?
Nothing found :(
Try something else