You are using an outdated browser. Please upgrade your browser to improve your experience.
by Joe White
February 26, 2011
The image of a purported iPhone 5 digitizer panel has hit the Web. If this is indeed an authentic iPhone 5 part, we can expect the fifth generation iPhone to feature a larger display, and a thinner bezel. However, the part (displayed in the above image) may just be a fake. Not long ago, a rumor that the iPhone 5 would feature a four inch screen was published by Digitimes. The website claimed that Apple would make the change in order to compete in the four to seven inch smart phone category. The above image of a purported iPhone 5 digitizer panel, originally spotted by 9to5Mac, seems to support this rumor (although no measurements for the panel have yet been posted). As you can see in the image, the iPhone's screen would extend almost to the very edges of the handset. Other iPhone 5 rumors claim that the fifth generation handset will be NFC capable, support "iTunes Cloud," and feature a variety of "under the hood" improvements. For more information, take a look at our fifth generation iPhone rumor roundup. And, if you have an opinion on the above iPhone 5 part, feel free to post it in the comments. [Original image source: iDealsChina] 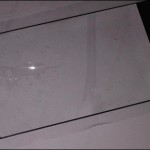