You are using an outdated browser. Please upgrade your browser to improve your experience.
by Joe White
February 28, 2011
An image of a purported white iPad 2 part has hit the Web, leading many to believe that Apple will release a white version of its second generation iPad this year. When Apple invited us to its March 2 event, saying: "Come see what 2011 will be the year of," I don't think any of us expected 2011 to be the year of a white iPad. Apple's white iPhone 4, which was supposed to launch last year alongside the black version, has not been mentioned for some time. If the above image is authentic, it would appear Apple has ditched the idea of a white iPhone, and is going to release a white iPad, instead. As you can see, the above part features space for a camera lens, too. Many are expecting the iPad 2 to be smaller, thinner, and feature a variety of "under the hood" improvements. However, we won't know for sure until March 2. Would you like a white iPad 2? Let us know your thoughts in the comments below. And, if you're wondering how a white iPad might look, check out this concept post. [via 9to5Mac] 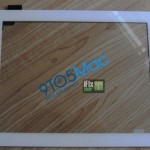 Could It Be The Year Of The White iPad 2?
Nothing found :(
Try something else