You are using an outdated browser. Please upgrade your browser to improve your experience.
by Joe White
March 9, 2011
According to a recent report, the 64GB iPhone 4 "engineering prototype" we told you about yesterday was possibly leaked by Foxconn. Furthermore, after examining its serial number, the prototype - which we now assume is real - appears to have been manufactured in early 2010. The iPhone 4 handset has reportedly been selling on Hong Kong's gray markets. It boasts a 64GB internal hard drive, and is apparently running iOS 4.1. Various "X" marks take the place of digits in the prototype's model number and FFC ID. On the back of the device, we are told it boasts "XXGB" - though this has been confirmed to be 64GB in the Settings application. M.I.C. Gadget has managed to post a hands on video of the prototype (below). As you can see in the video, the prototype appears to be the real deal. However, after examining the prototype's serial number, MacRumors claims that the prototype was produced in early 2010. This makes sense, as the prototype is an iPhone 4 handset (similar to the one Gizmodo bought), and is not an iPhone 5 handset - the kind of prototype one might expect to have been produced around early 2011. Regardless, this does mean Apple has been experimenting with 64GB iPhone handsets - something many of us would undoubtedly appreciate. Perhaps, when the iPhone 5 is announced, we'll see 32GB and 64GB versions - or even a mirror of the iPad storage sizes (16GB, 32GB, 64GB). We'll keep you posted. In the meantime, let us know your thoughts in the comments - and be sure to check out the video below. 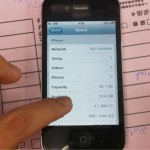