You are using an outdated browser. Please upgrade your browser to improve your experience.
by Casey Tschida
March 12, 2011
The new iPad is 33% thinner and a notably different shape due to the trimming. That means previous docking stations and dock equipped accessories for the first generation iPad will result in improper support. Apple has most certainly provided some iPad 2 compatible add-ons already, although, the Apple iPad Keyboard Dock appears to be one item the company considers as end-of-life. In yesterday's episode (#33) of The Talk Show with John Gruber and Dan Benjamin, Gruber pointed out the original Apple iPad Dock is indeed not intended to be carried over for iPad 2 use.

It doesn't sit right on the dock from last year. It fits but it doesn't seem to want to take a charge, and it's real, like, loosey-goosey in there.

That's not a problem as, logically, Apple has begun selling an iPad 2 Dock. However, there is no sign of an iPad 2 Keyboard Dock in Apple's online store. Could there be a delay? Extremely unlikely since Apple was prepared with nearly every other accessory they planned to offer an iPad 2 version for. It's safe to assume that Apple's suggested alternative for iPad 2 owners would be to purchase the iPad 2 Dock and the Apple Wireless Keyboard. Not only is this more expensive, $69 for the iPad Keyboard Dock versus $98 for the Apple Wireless Keyboard and iPad 2 Dock, but some may find it less convenient. The combined keyboard and dock offered an all in one product, which also didn't require the user to have a separate power source for the keyboard. If you don't need the dock connector available in portrait mode, there are products like the ZAGGmate or the option of using one of the new Smart Covers along with the Wireless Keyboard. Will Apple ever consider a universal iPad dock, as in the use of adapters, like that offered for iPhones and iPods? My guess is no, but it's never impossible. Have an opinion about Apple's decision to ignore the iPad Keyboard Dock for iPad 2 users? Please share it with us in the comments section. 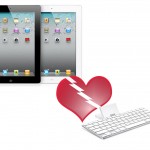 The Apple iPad Keyboard Dock Is Dead: What's The Alternative?

The Apple iPad Keyboard Dock Is Dead: What's The Alternative?
Nothing found :(
Try something else